Moses commanded that the Israelites renew their covenant with Yahweh when they reached the Promised Land. Joshua 8:30-35 records how this took place. Joshua led the Israelites up to the area of Shechem (which is not mentioned by name) to build an altar, sacrifice to God, write the law on plastered stones, and rehearse the covenant with the people audibly. A couple of interesting observations can be made regarding the rehearsal of the blessings and the curses with the people. The first has to do with the location of this event.

Moses had stipulated that 6 tribes were to stand on Mount Gerizim, and 6 tribes were to stand on Mount Ebal (Deut 27:11-13), with the Ark of the Covenant and the leaders of the nation in the valley between (Josh 8:33). In fact, there is a place in the valley just west of Shechem where there are two theater-like depressions opposite each other, one on Mount Gerizim and the other opposite it on Mount Ebal. These are clearly visible in satellite and aerial photos of this location. 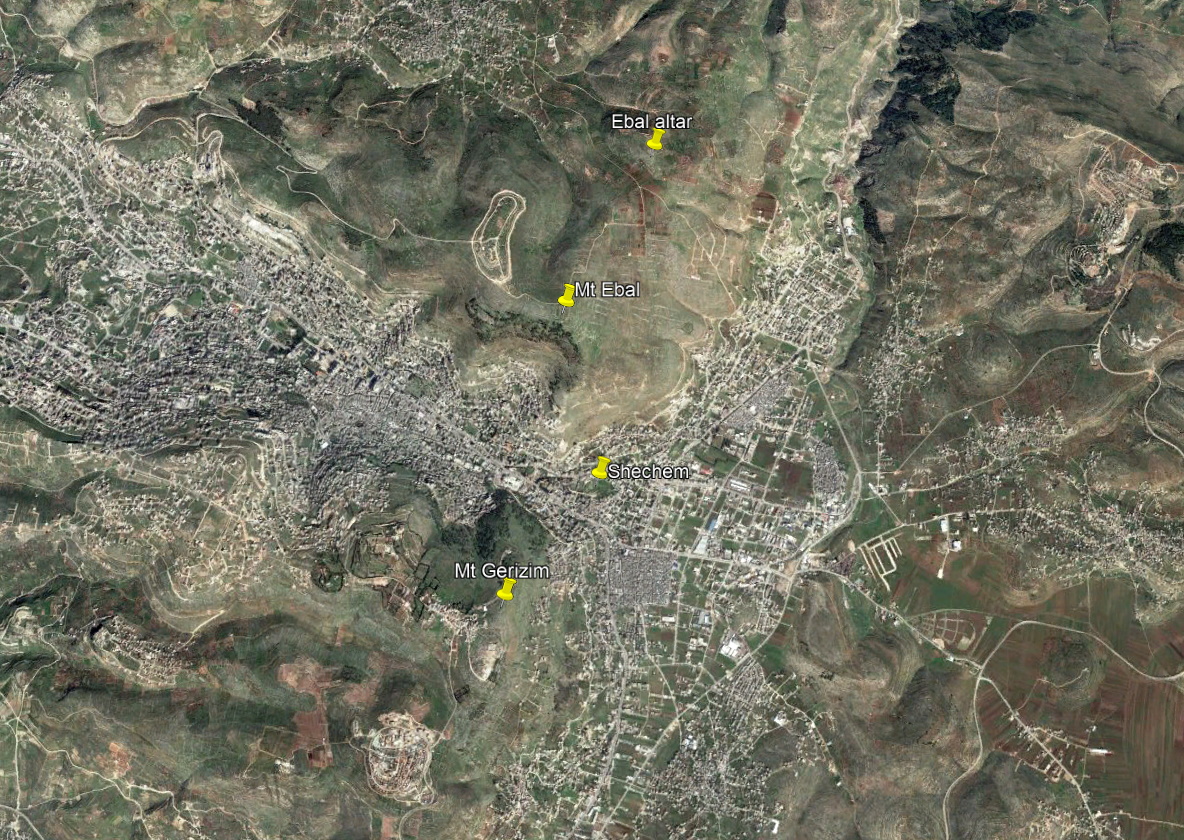 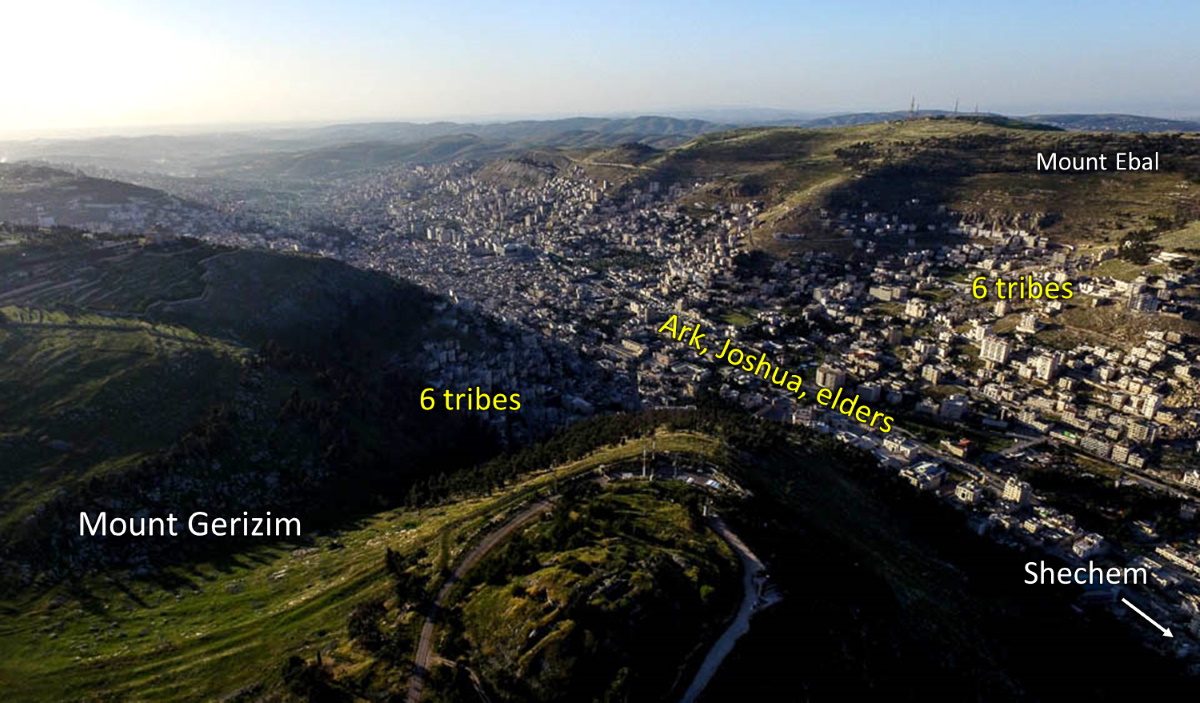 Aerial view of the natural amphitheater at Ebal and Shechem. Photo by Bill Schlegel.

An interesting experiment was conducted here by a man who traveled through this area in the late 1800’s, J. W. McGarvey. He wrote, “Our route took us back through the valley, and we resolved that while passing between the two mountains of Ebal and Gerizim, in the still morning air, we would try the experiment of reading the blessings and curses. It will be remembered by the reader that, in compliance with directions given before the death of Moses, Joshua assembled all the people on these two mountains, stationing six tribes on one, and six opposite to them on the other, and he stood between and read to them all the blessings and curses of the law . . . It has been urged by some skeptics that it was impossible for Joshua to read so as to be heard by the whole multitude of Israel. It is a sufficient answer to this to show that while Joshua read, the Levites were directed to repeat the words “with a loud voice” (Deut 27:14), and that it was an easy matter to station them at such points that their repetitions, like those of officers along the line of a marching army, could carry the words to the utmost limits of the multitude. But it is interesting to know that the spot chosen by God for this reading is a vast natural amphitheater, in which the human voice can be heard to a surprising distance. About half-way between Shechem and the mouth of the valley in which it stands there is a deep, semicircular recess in the face of Mount Ebal, and a corresponding one precisely opposite to it in Mount Gerizim. No man with his eyes open can ride along the valley without being struck with this singular formation. As soon as I saw it I recognized it as the place of Joshua’s reading. It has been asserted repeatedly by travelers that, although two men stationed on the opposite slopes of these two mountains are a mile apart, they can read so as to be heard by each other. We preferred to try the experiment in stricter accordance with Joshua’s example; so I took a position, Bible in hand, in the middle of the valley, while Brother Taylor and Frank, to represent six tribes, climbed halfway up the slope of Mount Gerizim; and Brother Earl, to represent the other six tribes, took a similar position on Mount Ebal. I read, and they were to pronounce the amen after each curse or blessing. Brother Taylor heard me distinctly, and I could hear his response. But Brother Earl, though he could hear my voice, could not distinguish the words. This was owing to the fact that some terrace-walls on the side of the mountain prevented him from ascending high enough, and the trees between me and him interrupted the passage of the sound. The experiment makes it perfectly obvious that if Joshua had a strong voice,–which I have not,–he could have been heard by his audience without the assistance of the Levites. As to the space included in the two amphitheaters, I think it ample to accommodate the six hundred thousand men with their families, though of this I cannot be certain. If more space was required, the aid of the Levites was indispensable” (J. W. McGarvey, Lands of the Bible, New York: Standard Publishing Co., 1880: 506-508). Today the many modern buildings in the valley and on the slopes prevent a similar experiment from being conducted.

The second interesting aspect of this event has to do with the way in which the Israelites were divided. Moses had stipulated that particular tribes stand on either side. “When you cross the Jordan, these shall stand on Mount Gerizim to bless the people: Simeon, Levi, Judah, Issachar, Joseph, and Benjamin. And for the curse, these shall stand on Mount Ebal: Reuben, Gad, Asher, Zebulun, Dan, and Naphtali” (Deut 27:12-13). To be clear, this was not a case of 6 tribes being blessed and 6 being cursed. Rather, 6 were to respond to the reading of the curses and six were to respond to the reading of the blessings (see Deut 27:15ff). So is there any rationale that can be discerned for which tribes were on one side or the other?

One possibility that may be discounted is age order. The oldest son of Jacob was Reuben, but his tribe is not mentioned until the second group. Another possibility that can be eliminated is any strict grouping according to birth mother. The 12 tribes mentioned here come from 4 different wives of Jacob, but their arrangement in this situation is somewhat mixed.

Arrangement of the tribes of Israel with relation to their birth mothers.

It is also interesting to compare the arrangement of the tribes with their later allotment of territory. There is at least a partial correlation between the tribes that responded to the blessings and their later assignment of territories in the heartland (Ephraim and Manasseh were descendants of Joseph), whereas those that responded to the curses were on the periphery. It should be noted, though, that the tribal allotments had not yet been assigned (other than those east of the Jordan), so this arrangement would not have been readily apparent to the tribes themselves as they participated in this event. 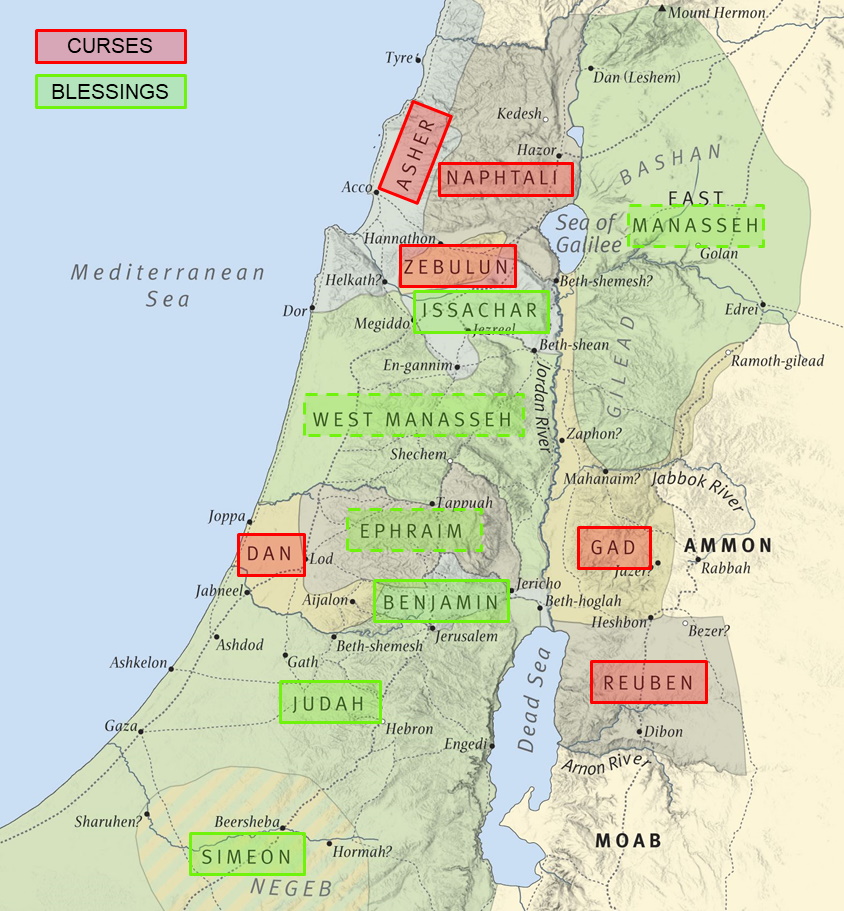 Distribution of the tribes according to their placement at the covenant renewal; adapted from map 4-13 of the ESV Bible Atlas.

It does not seem coincidental that the Levites, the priestly tribe that cared for the tabernacle, were on Mount Gerizim to respond to the blessings, and the same is true for Judah, from which the Messiah was to come. However, this does not explain the rest of the tribal arrangement.

As a final note, it is noteworthy that this narrative is the last time Mount Ebal is ever mentioned in the Bible.