Joshua 8:11 states that Joshua and the main Israelite force went up to Ai, “arrived in front of the city, and camped on the north side of Ai; now there was a valley between him and Ai.” This set of geographic details tells us that the city gate of Ai was on the north side of the city (thus it was the “front” of the city), and that Joshua camped on a ridge north of the city, across a valley from the city gate. I believe we can identify this ridge with a fair bit of certainty.

The first question, of course, is the location of Ai itself. There are a few reasons why it cannot be et-Tell, the city that has been associated with Ai ever since Edward Robinson’s suggestion in the 1800’s. One major reason et-Tell cannot be Ai is that it was deserted during the days of Joshua (Late Bronze Age, circa 1400 BC). Et-Tell was destroyed and abandoned at the end of the Early Bronze Age (perhaps 2200 BC), and was not re-inhabited again until the Iron Age I (about 1200 BC), and the city of the Iron Age I had no fortifications. Furthermore, the geography of the area requires that the road from Jericho to the Central Benjamin Plateau (sometimes known as the Zeboiim Route) runs on the south side of the city; this is true even today. Thus the main gate would have been on the south side of the city. By contrast, the north side of et-Tell is perched on the edge of a steep ravine (Wadi Jaya), where a gate would have little purpose. 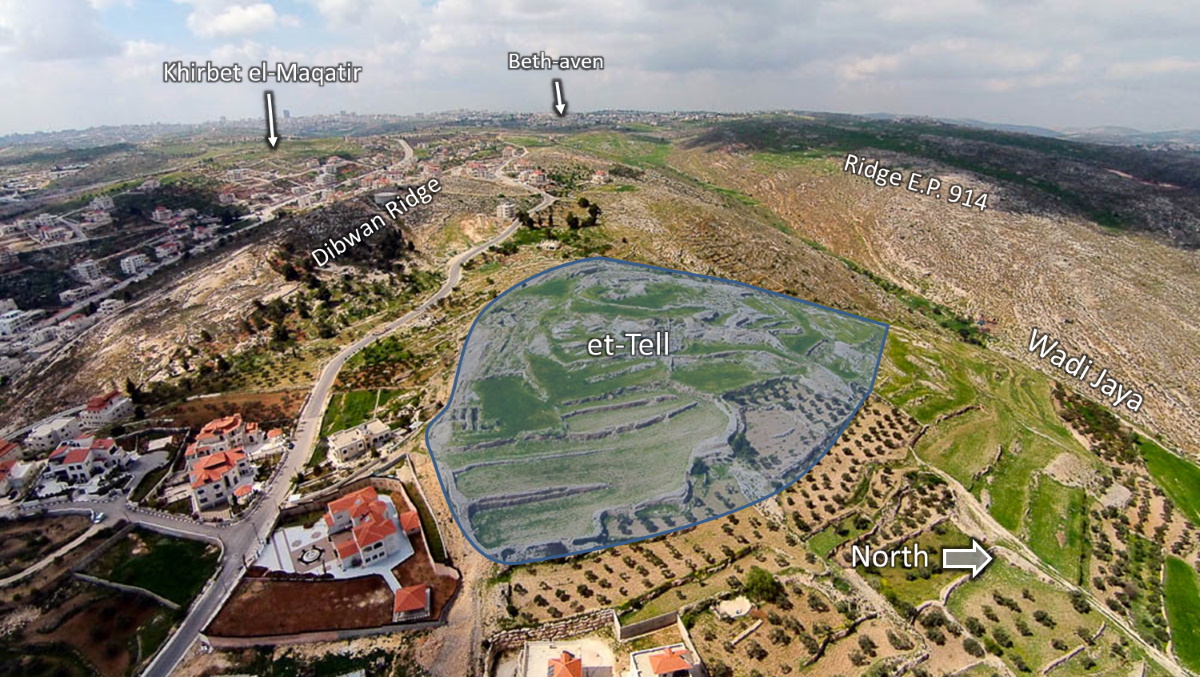 Aerial photo of et-Tell, from the east, by Bill Schlegel.

A much better fit is the site of Khirbet el-Maqatir, located just a half-mile south-west of et-Tell. Maqatir was a small fortified site during the Late Bronze Age, and the city gate was located on the north side. The north side of the city is bounded by a shallow valley that rises to a ridge that is approximately the same height as the city. The drop into the valley and back up to the ridge is about 100 ft in elevation. This ridge, which is the same ridge that et-Tell is located along, is about a third of a mile from Maqatir, an ideal distance at which Joshua could have made camp. Also, it is located along a ridge that, heading east, would have led directly toward the  Zeboimm Route, making an ideal escape route.

By modern reckoning, the center of this ridge is northeast of Maqatir, not due north. However, Hebrew does not have a term for the intermediate points of the compass, so a location that we would call northeast could rightly have been identified as north by the narrator of this account.

There is an even more prominent hill even further north of Maqatir, known as Ridge E.P. 914 (or Jebel Abu Ammar), that has sometimes been suggested as the location of Joshua’s camp. One of the appealing aspects of this ridge is that it is the highest ridge within sight, and has a commanding view of the area. However, there are several reasons why it seems unlikely as a place for Joshua’s camp. One is that this ridge, although due north of Maqatir, is actually separated from Maqatir by two valleys, not one. This can be seen in an elevation map of the area from Google Earth. This line is drawn directly north from Maqatir; the valleys become even more pronounced as one moves eastward. 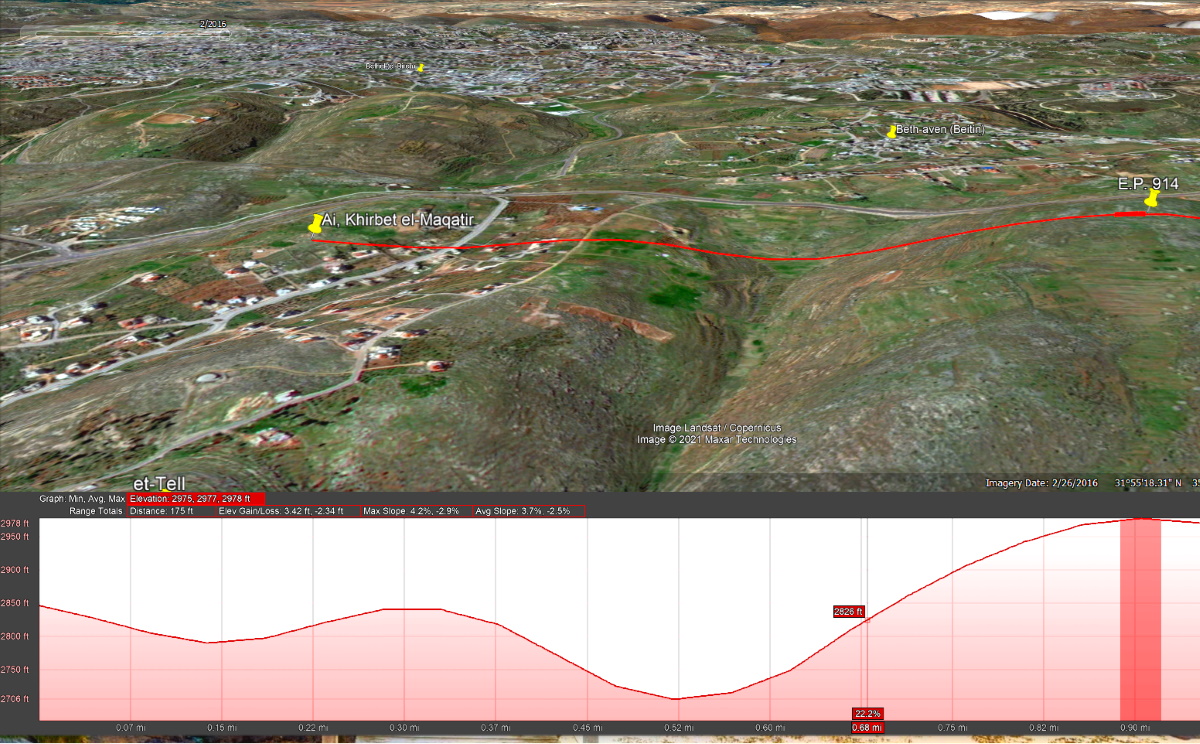 Another drawback is that this ridge is nearly a mile away from Maqatir. In addition, at its high point, this ridge is actually closer to Beitin (probably ancient Beth-aven) than to Maqatir, which would be an odd choice for a camp if the target was Maqatir. Finally, this ridge offers no easy access to the Zeboiim Route toward Jericho. The ridge ends rather abruptly just past et-Tell; fleeing that way (Josh 8:15) would have left Joshua and the Israelites at a critical tactical disadvantage, fleeing down a narrow gorge while their enemies had the high ground above them.

An excellent map that shows this suggested location is map 3-5 in the Satellite Bible Atlas by Bill Schlegel. This map shows the locations discussed here. 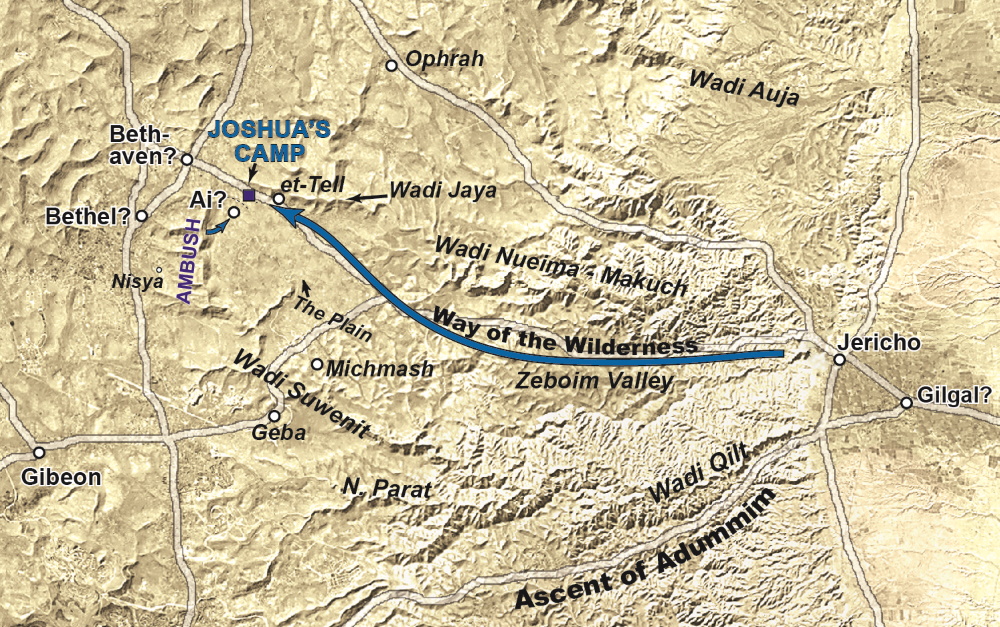 Map of Joshua’s camp, adapted from map 3-5 in the Satellite Bible Atlas, by Bill Schlegel.

One last note of interest. Joshua set an ambush party west of the city, in what is now known as Wadi Sheban. Joshua 8:19 implies that when Joshua lifted his javelin, it was seen by the men in ambush (or their scout), and was taken as a sign for them to attack the city from the rear. In fact, there is a direct line of sight from the western lip of the Wadi Sheban, across Khirbet el-Maqatir, to the Dibwan Ridge where I suggest Joshua was situated. Again, an elevation map from this area makes this plain. 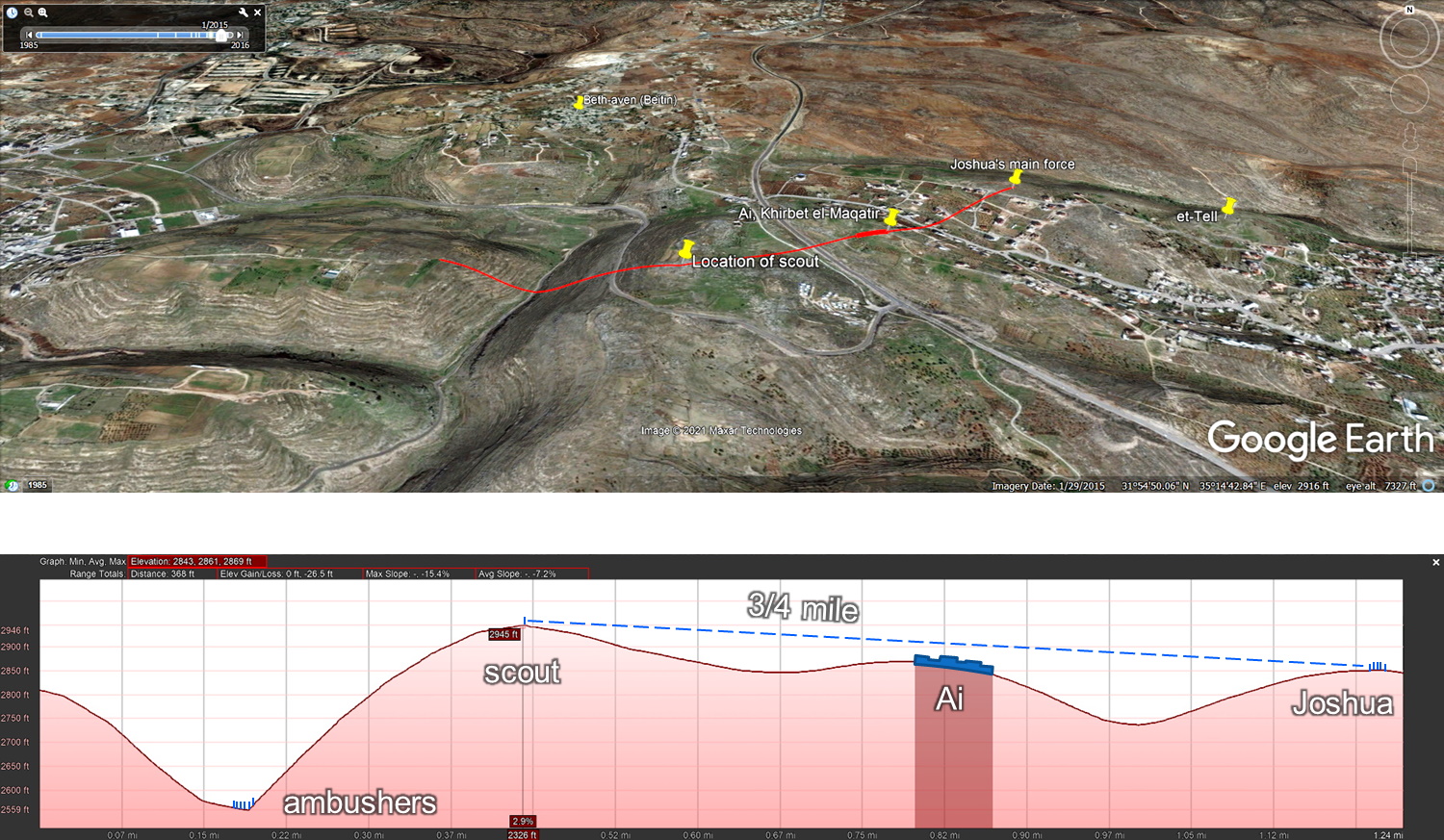 Elevation map showing the deep Wadi Sheban, the vantage point of a scout, the location of Maqatir (darker bar) and the Dibwan Ridge.

The distance from the suggested location of the scout to the Dibwan Ridge is about 3/4 of a mile, which is probably about the maximum distance at which such a signal could be seen, but it is noteworthy that there is a direct line of sight.

For those interested in seeing these locations in Google Earth, here are the coordinates for the different sites. If you copy a coordinate string as a single item and paste it into the search bar in Google Earth, it will take you to that site.