How big were the stones? There are two bits of data that help get us in the ballpark. One is that each stone was carried on the shoulder of a man. This would limit the size to something less than 100 lbs for the average man. The other is that they were carried for some distance. Gilgal was east of Jericho, which would place it on the desert plain between Jericho and the Jordan River. Jericho is about 5.5 miles from the Jordan River;  the nearest flat ground that would have been suitable for a large campground is about 2 miles west of the Jordan. It can probably be concluded then, that the men had to carry the rocks for at least a couple of miles, and perhaps as far as four miles. Given these two factors, it would be surprising if the stones weighed more than 50-75 lbs. Such stones would probably not measure more than a couple of feet in length, at most. The painting that accompanies this post, by William Brassey Hole, is probably pretty accurate in this regard.

How were the stones arranged? The text does not give an answer to this question, but there are some interesting parallels from archaeology that probably point us in the right direction. One might speculate that they could be arranged in a row, stacked up in a pile, or arranged in a circle or square. Some commentators even suggest that they were used to build an altar, although there is no indication of this in the text (and 12 stones would have produced a very small altar). Standing stones have been found in numerous archaeological settings, usually in the context of a religious installation, and the stones are nearly always placed in a line. Examples include the standing stones at the gate of Dan, those at the small Egyptian temple in the Timna Valley, and the very large standing stones at Gezer, to name a few. A fascinating example is the double row of twelve stones, six per line, that were set up on the plain below Har Karkom during the Early Bronze Age (time of Abraham, roughly). These are also approximately the size of stone that Joshua and the Israelites would have used. 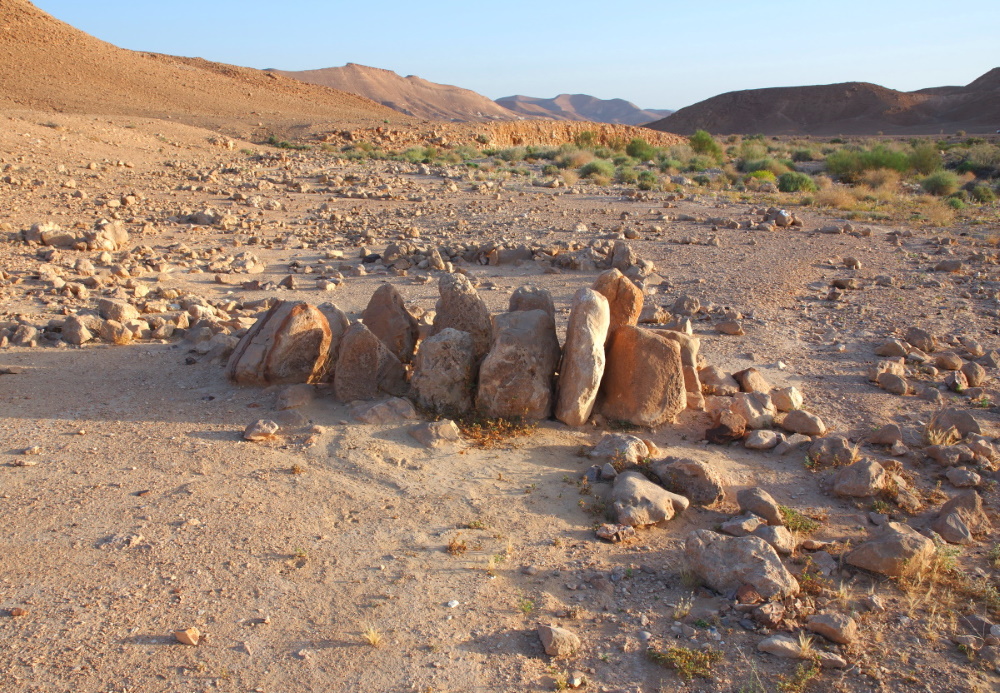 Although it dates many centuries before the time of Joshua, this may be the closest parallel that has been discovered that might represent what Joshua’s memorial looked like. 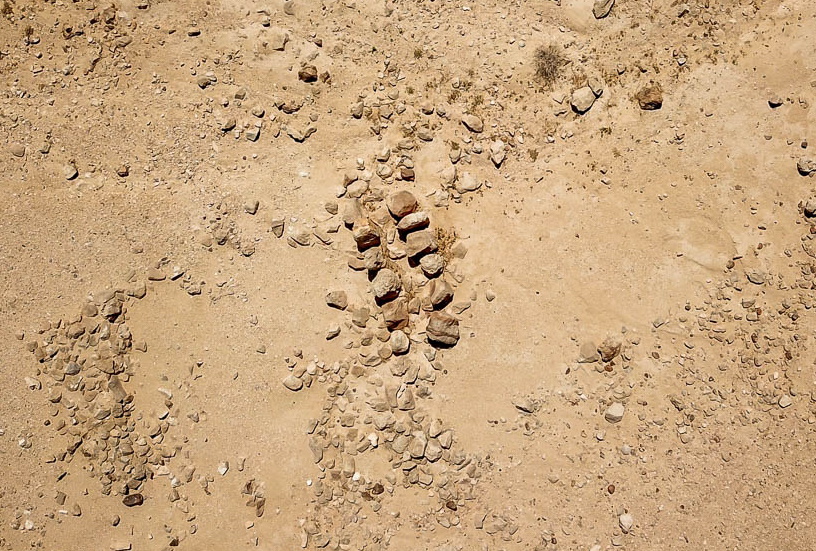 Aerial view of the 12 standing stones at Har Karkom. Photo by A.D. Riddle.

Another tantalizing bit of evidence comes from the Medeba mosaic map. This 6th century AD floor mosaic is a map of the Holy Land. Near Jericho there is a place identified as “Gilgal, which is also Twelve Stones” (Gk. ΓΑΛΓΑΛ ΤΟ ΚΑΙ ΔΩΔΕΚΑΛΙΘΟΝ). The picture next to that label on the mosaic shows a church building and a double row of twelve stones, six to a side (visible on the mosaic as twelve white tesserae on a black background). 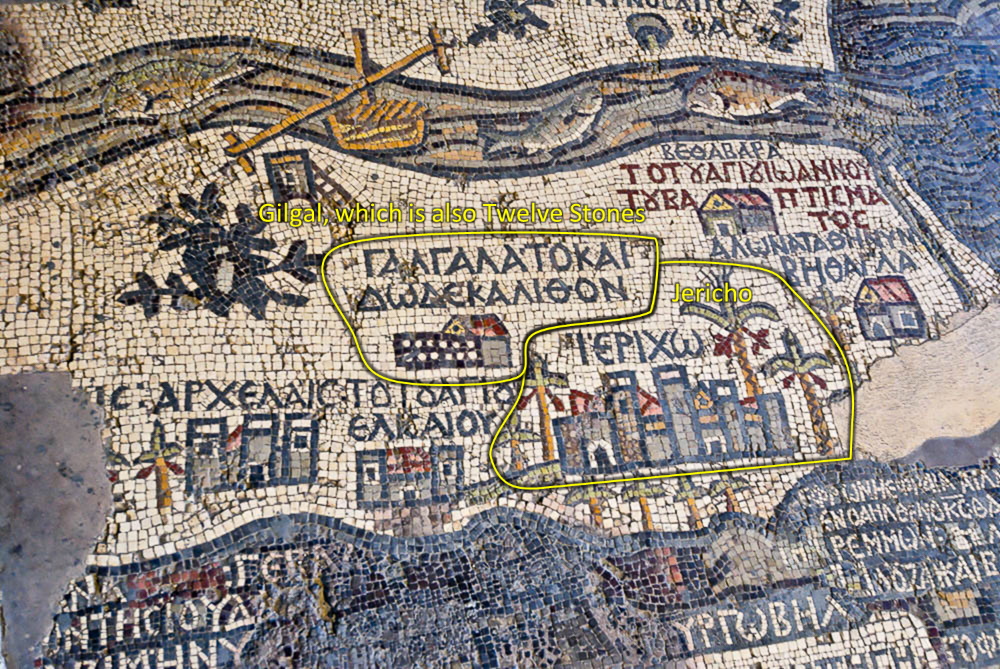 Medeba Map mosaic with the location of “Gilgal, which is also Twelve Stones,” 6th century AD. Photo by Todd Bolen.

While this does not prove the arrangement of the 12 memorial stones, it seems at least as likely as any other arrangement.

Could this memorial still be found? In a word, unlikely. There are a number of reasons for this. One is that, as shown above, these stones were not mammoth rocks that would be hard for later passersby (or a local farmer) to move. Another complicating factor is that we don’t know the exact location of Gilgal. More than a half-dozen locations have been suggested by various scholars (including En el-Gharaba, Khirbet en-Nitleh, Tell el-Matlab, Tell el-Jurn, Tell Deir el-Ghannam, Khirbet el-Mefjir, Suwwanet et-Thaniya, and others), but none has produced any convincing evidence of being the biblical site. In fact, Gilgal seems to have been a religious site, not a regular village or town, so any remains might have been hard to discern under the best of circumstances.

In addition, the area east of Jericho is pretty large. The area that might have been used for a campground (discounting the rough terrain just to the west of the Jordan River flood plain) comprises about 11 square miles, as illustrated by this Google Earth view. 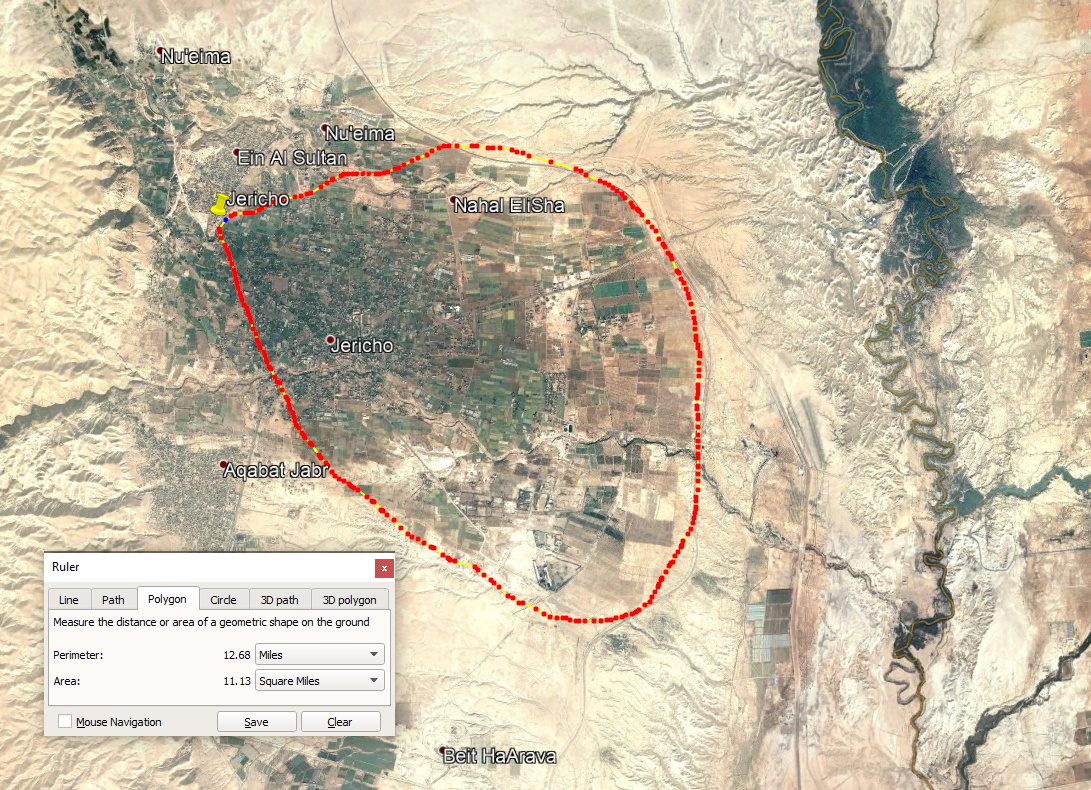 Possible area where Gilgal might be located – Google Earth.

To complicate matters still further, modern irrigation methods have allowed most of this area to be cultivated in the last century, which has disturbed nearly all of the ground. This makes the likelihood of finding any remnant of the memorial set up by Joshua extraordinarily slim. But then, we have the full account handed down in the book of Joshua, so as fun as it might be to find the memorial, we don’t really need it anymore.