Daniel 9:20-27 is one of the most important passages for understanding the prophetic timeline of the Bible. At the same time, it is given in veiled language that makes it difficult to understand. Although it is often referred to as the “Seventy Weeks” prophecy, the actual statement is that “seventy sevens” are decreed for the people and the holy city.

Nearly everyone understands these “seventy sevens” to represent seventy sets of seven years, or 490 years. This understanding can be traced back before the time of Jesus. The Hebrew scroll shown as the cover photo for this post is one of the Dead Sea Scrolls, known as 11QMelchizedek [it came from cave 11 at Qumran]. It dates to about 100 BC. This document interprets the prophecy of Daniel to refer to a period of 490 years. This is considered correct by most conservative Bible scholars today, and we will proceed on the assumption that this is correct.

Two major issues are important in understanding this prophecy. The first is the way in which these 490 years are divided; the second is the actual length of time they cover.

Gabriel begins by informing Daniel that “seventy sevens” have been decreed for his people and for Jerusalem, the holy city (Dan 9:24). This number is then divided into three parts. Seven sevens and sixty-two sevens are to come between the issuing of a decree to rebuild Jerusalem and the Messiah (Dan 9:25); added together, that equals sixty-nine sevens, or 483 years. “After” the completion of the sixty-two sevens (which follows the first seven sevens), the Messiah will be cut off and the city and sanctuary of Jerusalem will be destroyed (Dan 9:26). Thus the first sixty-nine sevens, i.e. 483 years, falls between a decree to rebuild Jerusalem and the death of the Messiah.

The final period, the seventieth seven, or “week,” begins with a covenant between the “prince who is to come” [whose people destroyed the city and temple] and the Jewish people (Dan 9:27). In the middle of this seven-year period this person will put an end to sacrifice and offering. This strongly implies that the place of sacrifice, the temple, has been rebuilt in the meantime. This means that there is a period of sixty-nine sevens (483 years) from a decree to rebuild until the Messiah, which is followed by an intervening time in which the Messiah is killed, the city and temple are destroyed, and the temple is rebuilt. Following that, the last seven is described, beginning with the establishment of a covenant and marked in the middle by the cessation of offering and sacrifice. No clue is given as to how much time elapses between the end of the sixty-nine sevens and the seventieth seven, but there is clearly a gap between them.

When did the sixty-nine sevens begin? There are four times in history when decrees were made regarding the rebuilding of the temple in Jerusalem and/or the city itself. The initial decree to rebuild the temple (and by implication, the city) was under Cyrus in 537 BC. This decree was renewed under Darius I in 520 BC. The temple was finally completed in 516 BC, but the city remained largely in ruins. Ezra sought to rebuild the city, and was apparently given approval in 457 BC, following an investigation. But it was not until Nehemiah arrived that the city was actually rebuilt. Nehemiah was issued permission to rebuild the city by Artaxerxes I in 444 BC. 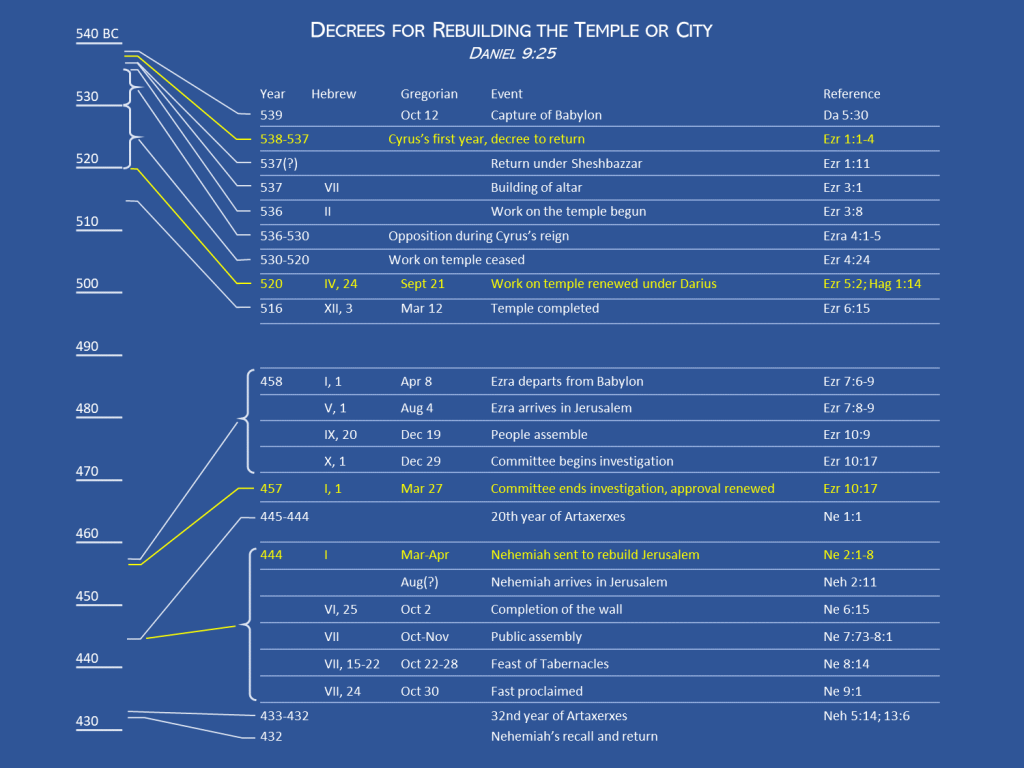 Timeline highlighting the 4 decrees to rebuild the temple and/or city of Jerusalem.

For this next part, you may want to grab a calculator.

Although the date of Jesus’s crucifixion is the subject of debate, the most likely date is AD 33 (see Harold Hoehner’s detailed discussion in his Chronological Aspects of the Life of Christ). This is based on the lunar phases (Passover was on a Friday that year), and on some other chronological information (e.g. John the Baptist began his ministry in the 15th year of Tiberius, AD 28/29, Luke 3:1-2). Subtracting 483 years from this gives 449 BC, which does not align with any of the decrees listed above [on that calculation, remember that there is no year zero between BC and AD).

Here is where things get interesting.

The ancient Hebrews, along with most other ancient cultures, counted months according to the lunar calendar, which is 30 days in length [technically, 29.5 days, but they always rounded it to 30]. This gave each year (12 months) a length of 360 days. Of course, that is not the true length of the solar year, a fact they were well aware of, and each culture had its own way of dealing with the difference. The Hebrews would add an extra month at the end of some years to bring the lunar and solar calendars back together. A number of scholars believe that the “seventy sevens” in this prophecy are meant to represent 490 360-day years. As odd as that sounds to those of us who are used to the Gregorian calendar, there are other places in scripture where this is done. Here are two examples.

Daniel and Revelation do something similar with regard to the 7-year tribulation period. Dan 9:27 indicates that the covenant will be broken in the middle of the “week” (שָׁבוּעַ); referring to the second half of this same period, Dan 7:24-25 refers to persecution that lasts “a time, times, and half a time,” which is to be understood as 3.5 years, or half of the seven years. Revelation picks up this same language, referring to Israel’s banishment to the wilderness for “at time, times, and half a time” (Rev 12:14), a clear allusion to Daniel 7.  Rev 12:6 describes this same time period as lasting 1,260 days, and Rev 11:1 calls it 42 months. Again, somebody is using months of 30 days to calculate these things.

We don’t know what day the decree was issued for Nehemiah to rebuild Jerusalem [Hoehner argues that it was New Years day, or March 5, 444 BC; but this is supposition]. Regardless, a date like this works if we calculate the “sixty-nine” sevens as 483 years of 360 days each. The timeline below reflects this kind of calculation. A similar handout is available here.

Timeline with the approximate relationship between the 69 “weeks” and the 70th “week” of Daniel 9.

What might be the purpose of a prophecy like this being based on a 360-day lunar year rather than a 365.24-day solar year? Although this hard to answer with certainty, it may be simply that it was intended to obscure the prophecy even while it was in plain sight. Keep in mind that much of the prophecy is stated obliquely; even the reference to the time periods does not use the terms “years,” but only numbers and the term “week.” Remember too that this is apocalyptic literature, and it is not unexpected that it would use such language.

A final question that presents itself is the significance of the very first set of “seven sevens.” Why is the set of sixty-nine divided into seven and sixty-two (Dan 9:25)? The text gives no answer. It is intriguing, though, that if this period begins at 444 BC, as argued above, the first 49 years would end around 395 BC. This is quite close to when the ministry of the Jewish prophets went dark. We do not know exactly when the last book, Malachi, was written, but it is usually considered to have been roughly 400 BC. Perhaps this guess is wrong, but if nothing else it is an intriguing coincidence.

The prophetic timeline revealed in Daniel 9 forms the foundation of much subsequent prophecy. A good understanding of this prophecy is very helpful for study of the book of Revelation, for example. Although it is important to realize that it is not given to allow us to predict the future in detail, it clearly reveals that God fulfills his decrees and brings about what He wishes, when He wishes.