No Room in the Inn?

As the KJV renders it, Jesus was laid in a manger “because there was no room for them in the inn” (Luke 2:7). Was Joseph turned away by some hard-hearted inn-keeper who had run out of rooms? A closer look at the context reveals a different story.

The word rendered “inn” by some versions is the Greek word kataluma (Gk. κατάλυμα). This word does not refer to an inn, hotel, or motel, i.e. sleeping quarters up for rent. There were such establishments in those days, but they were referred to by a different word, pandocheion (Gk. πανδοχεῖον). An example of this kind of establishment is the inn where the Good Samaritan left the Jewish man he rescued on the road from Jerusalem to Jericho (Luke 10:34). So what kind of place was it that had no room?

The word kataluma actually refers to guest quarters that were part of, or attached to, a residence. This is clearly demonstrated by the reference to such a place in the Gospels. It was this kind of room that Jesus reserved at a home in Jerusalem for the Last Supper (Luke 22:11, Mark 14:14). Additionally, the related verb kataluō (Gk. καταλύω) refers to being a guest, not to renting a hotel room–“And when they saw it, they all began to grumble, saying, ‘He has gone to be the guest of a man who is a sinner'” (Luke 19:7) What we should understand, then, is that by the time Mary and Joseph arrived at the house of their relatives in Bethlehem, the guest room was already full, likely with a large family.

Prior to World War I, the scholar and explorer Gustaf Dalman traveled through Palestine recording a lot of interesting things. In his book Arbeit und Sitte in Palästina [Work and Customs in Palestine] he published photos and plans for a number of indigenous homes, some of which are large and wealthy enough to have guest quarters. The two plans shown here are adapted from his work and show such guest quarters. 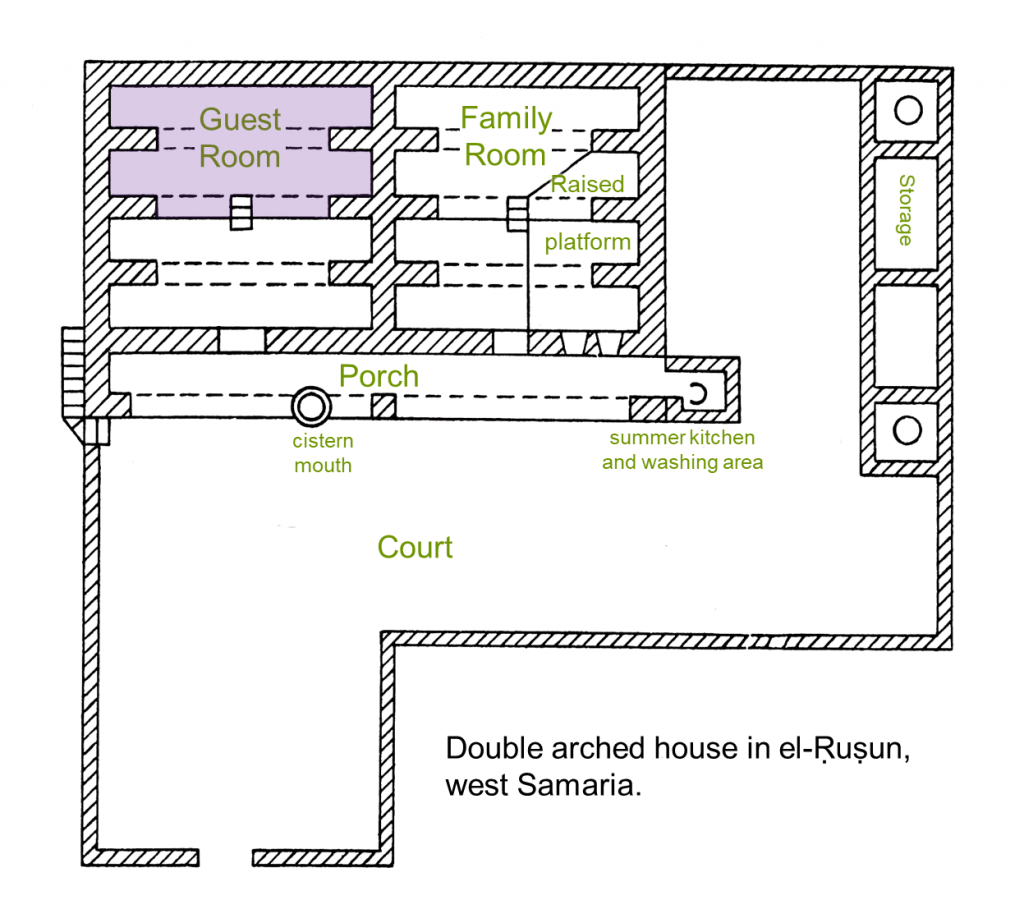 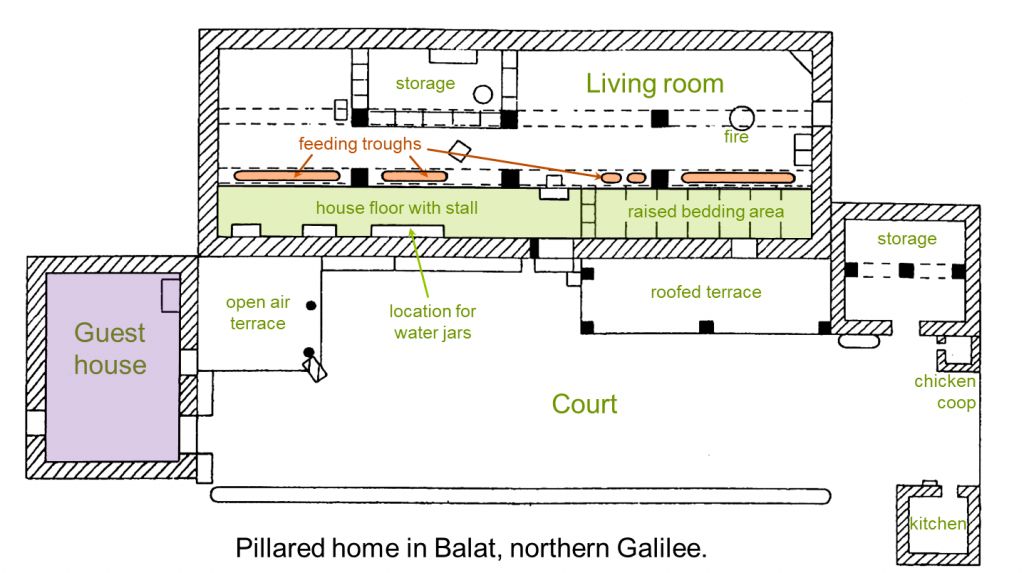 A noteworthy feature of the second home is the area highlighted in green, which indicates areas within the home for animals. This was actually a rather common element in the homes that Dalman recorded. The plan below shows a duplex; both residences have a central area for animals, including feeding troughs (mangers) located along them. Note also that in both of these duplexes the living area is raised above the stable area, and is accessed by a set of steps. 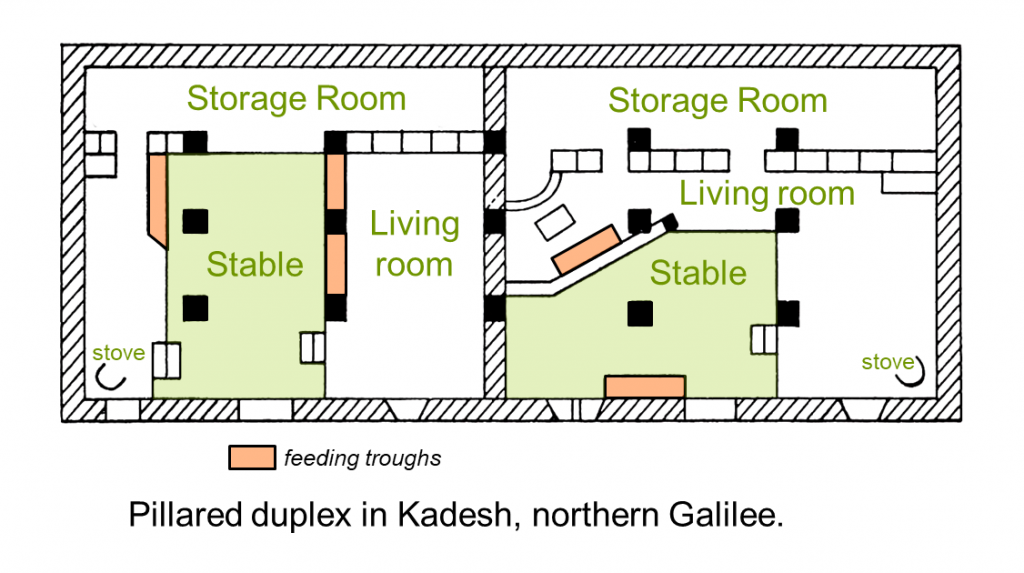 Assuming that the home included a stable area inside for animals, it is only natural that Jesus would have been laid in a hay- or straw-filled manger. He was not born out in an isolated shed or outbuilding, but in the center of the home, surrounded by friends and family.

Although this may sound at first as though it conflicts with his being born in a home, that is not necessarily the case. Many houses in the Bethlehem were and still are built in front of caves. In fact, Dalman recorded one house that was built entirely within a walled-off cave. This house was located in the Jerusalem area, only a few miles north of Bethlehem. 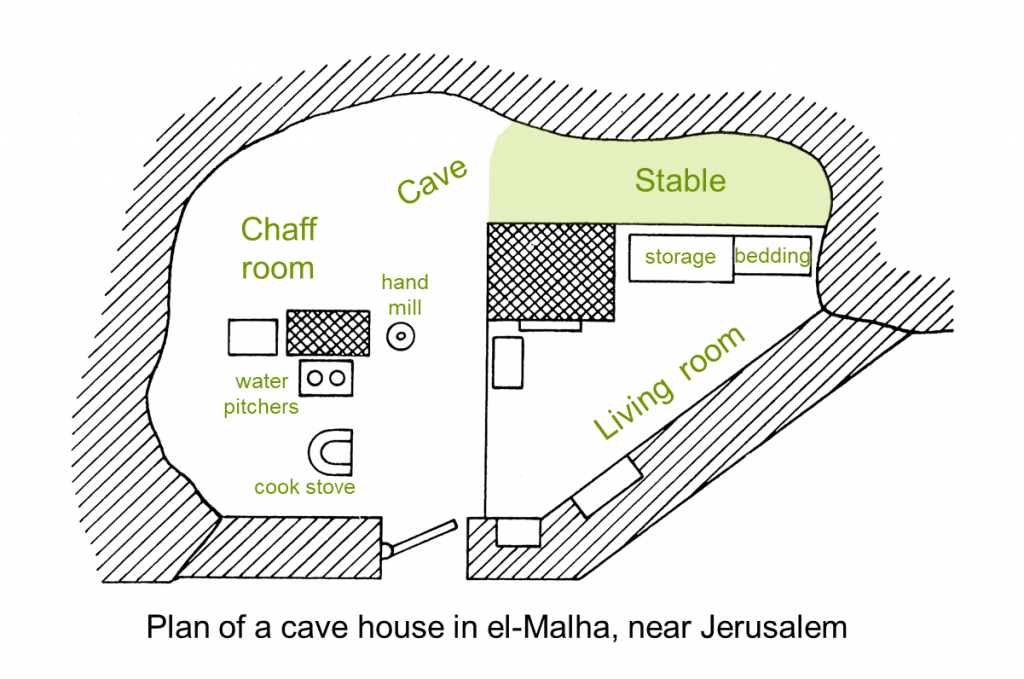 It should also be noted that this house, even in a cave, had a stable area for animals. Thus it is not difficult to imagine that Jesus was born in a warm home with lots of relatives around, and also that he was laid in a manger or feeding trough next to a stable area.