There are a number of references to hanging in the book of Esther, which has traditionally been paired in English translations with the noun “gallows.”

However, the “gallows” was not a platform and cross beam as we think of it, for hanging a person by breaking their neck or by strangulation. The Hebrew word used here and elsewhere in Esther is ets (עֵץ), literally “a tree,” although the word can refer to a pole or other wooden object. Both archaeology and ancient literary sources indicate that the technique in question here was actually impalement.  Consider the following:

1) The gallows as we think of it (Old West) is a modern invention that was unknown in antiquity; this was certainly not the method used, because it had not yet been invented;

4) In the Behistun Inscription, Darius the Great himself describes four different leaders (along with their followers) whom he had impaled following rebellions (they are named as Phraortes, Tritantaechmes, Vahyazdâta, and Arakha). 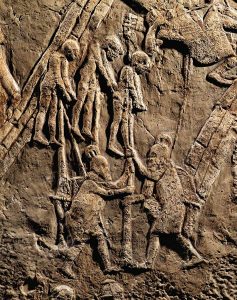 It is noteworthy that some of the more recent English versions have picked up on this and have translated these passages accordingly.

Common English Bible (2011) Esther 5:14 So his wife Zeresh and all his friends told him: “Have people prepare a pointed pole seventy-five feet high. In the morning, tell the king to have Mordecai impaled on it. Then you can go with the king to the feast in a happy mood.” Haman liked the idea and had the pole prepared.

New International Version (2011) Esther 5:14 His wife Zeresh and all his friends said to him, “Have a pole set up, reaching to a height of fifty cubits, and ask the king in the morning to have Mordecai impaled on it. Then go with the king to the banquet and enjoy yourself.” This suggestion delighted Haman, and he had the pole set up.

New Living Translation (2007) So Haman’s wife, Zeresh, and all his friends suggested, “Set up a sharpened pole that stands seventy-five feet tall, and in the morning ask the king to impale Mordecai on it. When this is done, you can go on your merry way to the banquet with the king.” This pleased Haman, and he ordered the pole set up.

Although it offends modern senses to read about these things, it does appear that these versions have correctly captured the events that took place in the days of Esther and Mordecai.