Esther and the Presumption of Innocence

One of the founding legal principles of United States is the presumption of innocence. We are “innocent until proven guilty” in the eyes of the law. Although many American’s do not realize it, this is a principle that originates in the Bible. Two examples demonstrate this. Deut 17:6 requires that corroborated evidence must be used for a conviction, “on the evidence of two or three witnesses . . . not on the evidence of one witness.” An accusation alone is insufficient to condemn. There must be evidence of the strongest kind (multiple eyewitnesses) before anyone can be condemned to death. This is a principle that is reiterated several times in the New Testament (e.g. 2 Cor 13:1, 1 Tim 5:19, Heb 10:28).

A second illustration of the presumption of innocence in the Bible comes from the difficult case of a woman accused of adultery, where the accusation is very serious but witnesses are unlikely to be found. In such a case the woman was to stand before the priest and make an oath, and she would be given water to drink that had a bit of dust and ink dissolved in it (Num 5:11-31). If the woman was innocent, nothing would happen to her; if she was guilty, she would bring a curse on herself and be unable to bear children. Notice that drinking this concoction would not naturally have any ill affect. It would take an act of God for something bad to happen, thus illustrating the presumption of innocence. 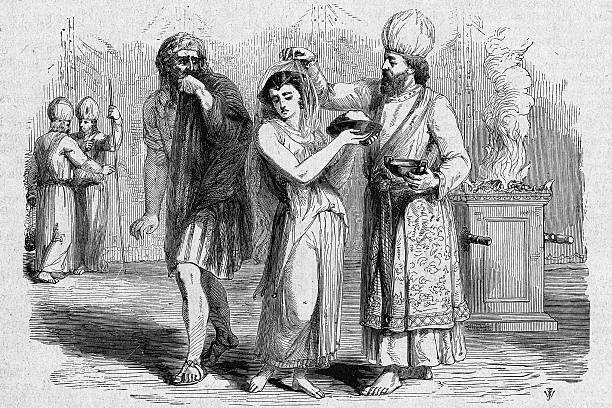 This contrasts starkly with the pagan custom. The Code of Hammurabi (18th century BC) stipulated that a woman so accused was to be thrown into the river, probably tied up. If she were to survive, which would take an act of God, she would be considered innocent. Otherwise, she was presumed guilty. This illustrates the presumption of guilt, not innocence.

In the book of Esther, Haman made a simple accusation against the (unnamed) Jews (Esth 3:8-9). No corroborating evidence was provided, nor was any sought. Since no one came forward who was able or willing to prove their innocence, they were condemned to death by Haman’s edict. How much better it would have been if Persian law had been founded on a presumption of innocence, and none could be condemned without sufficient evidence. But the Persian empire did not operate on biblical principles, leaving the truly innocent vulnerable to the worst injustices.

American culture has shown an increasing tendency toward the presumption of guilt in recent years, especially in the public sphere. The Duke Lacrosse team in 2006 was falsely accused of heinous crimes, yet was widely assumed by the media to be guilty. The Me Too movement has been particularly quick to assume guilt without waiting for actual evidence; the accusation itself is considered sufficient reason to condemn. The ongoing witch hunt by Jerrold Nadler and other Democrats in congress is completely based on a presumption of guilt rather than a presumption of innocence, as was the Mueller probe before it.

Had not God intervened on behalf of His people in the days of Esther, the presumption of guilt would have doomed them. But God did work for His people and overturned the evil schemes of Haman. We can thank God that we live in a time and place where the presumption of innocence is still a valued principle, even if it is not always practiced.