Revelation 8 describes seven trumpets that were blown by seven angels as part of the judgment of earth’s inhabitants. What were trumpets like in the 1st century AD, and how would John’s audience have envisioned his description?

During the time of the Hebrew Bible, the typical “trumpet” (Heb. shofar) was a hollowed out animal horn, often from a sheep or goat. The shofar is still used by Jews today in some contexts. 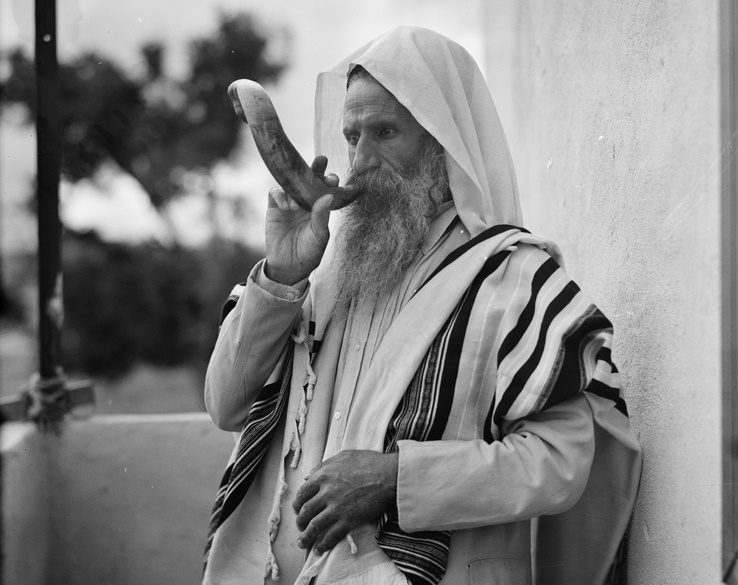 However, this is not the kind of trumpet with which most of John’s audience would have been familiar. Instead, the Greeks and Romans used metal trumpets, often made of brass, sometimes of silver. One of the two most common kinds was a curved trumpet known as a buccina. The buccina  curled downward and then back behind the trumpet player, eventually coming back around over the head or shoulder. Even more common was the straight trumpet, known as a salpinx. And, in fact, this is the word that is used in Revelation 8 to describe the trumpets played by the seven angels (sometimes using the noun salpinx, Rev 8:2,6,13, and sometimes the verb salpidzo, Rev 8:7,8,10,12; 9:1,13). 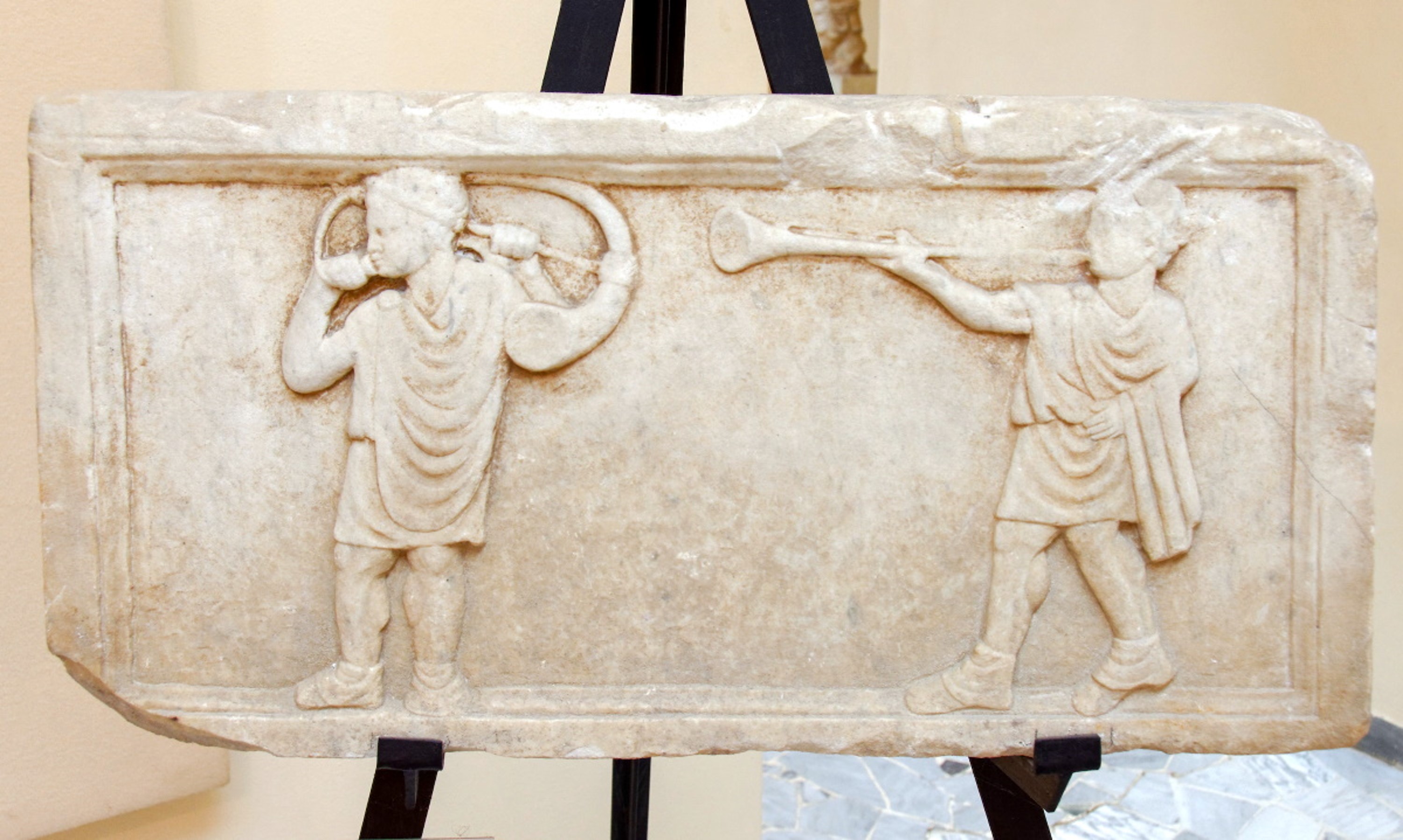 Depiction of Roman trumpet players with a buccina (left) and a salpinx (right). Photo by Todd Bolen, BiblePlaces.com.

The straight trumpet (salpinx) had a variety of uses in the Roman world. It was used by the military for giving signals, as it had been used by the Greeks for centuries before that. In fact, nearly all of the earlier Greek depictions of this instrument are associated with military events. In a military context, it was used primarily to summon troops to the battle line and to signal an initial charge. 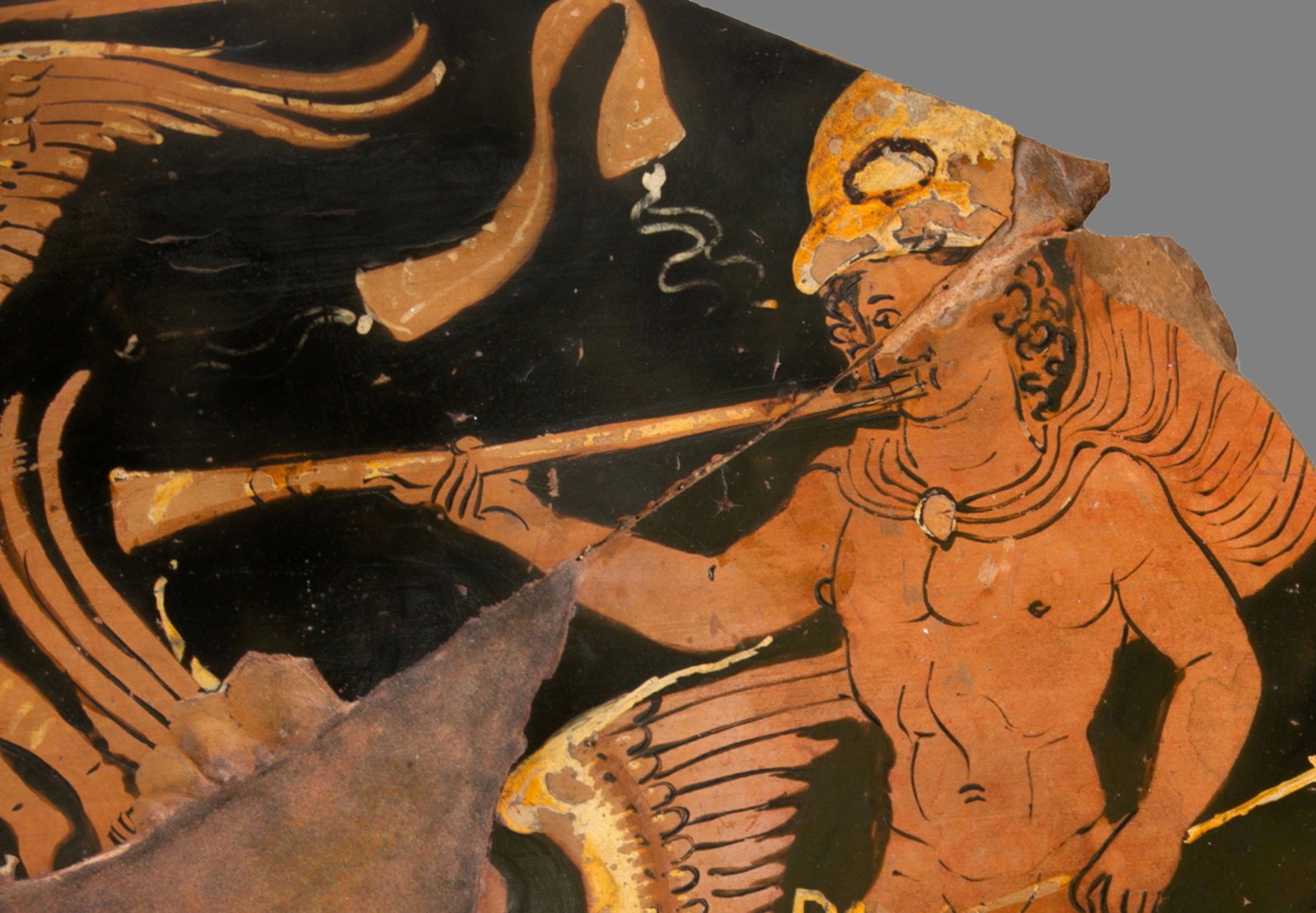 Depiction of a man blowing a salpinx, late 4th century BC. Source: Metropolitan Museum of Art.

In the Roman world, the trumpet was also used in association with athletic events, again as a signal. It was used at the start of particular events, probably as a way to get the attention of the crowd, and sometimes it was also used to signify that a particularly well-known athlete had arrived. It is probably this signaling purpose, associated with both military and athletic settings, that was intended by John when he made reference to the seven trumpets being blown. 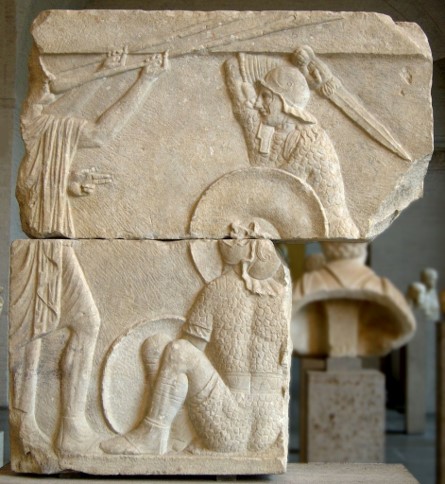 Trumpeters at a gladiator fight, 1st century BC. The trumpeters signal victory for the standing man, who awaits the decision of the crowd as to whether the loser will live or die. Source: Wikimedia Commons.

The typical salpinx was 2.5 to 4 feet (0.8–1.2 m) in length. Because of their length, and perhaps to accommodate easier transportation, these instruments were sometimes constructed in segments.

The segmented salpinx shown below was reconstructed based on both ancient depictions and remnants of actual trumpets from the Greco-Roman period. 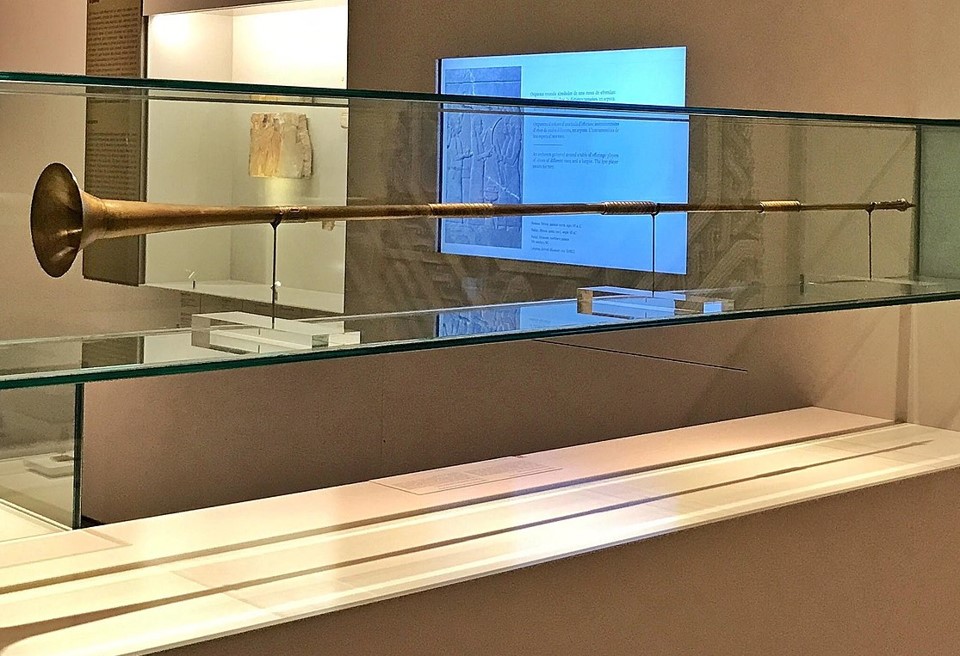 Reconstruction of a Roman trumpet at the Louvre Museum. Source: Wikimedia Commons.

The silver tetradrachma shown below depicts Nike (Victory) as a winged figure at the prow of a ship, blowing a straight horn. The coin was issued by Demetrios I to celebrate his important naval victory at Salamis in 306 BC. 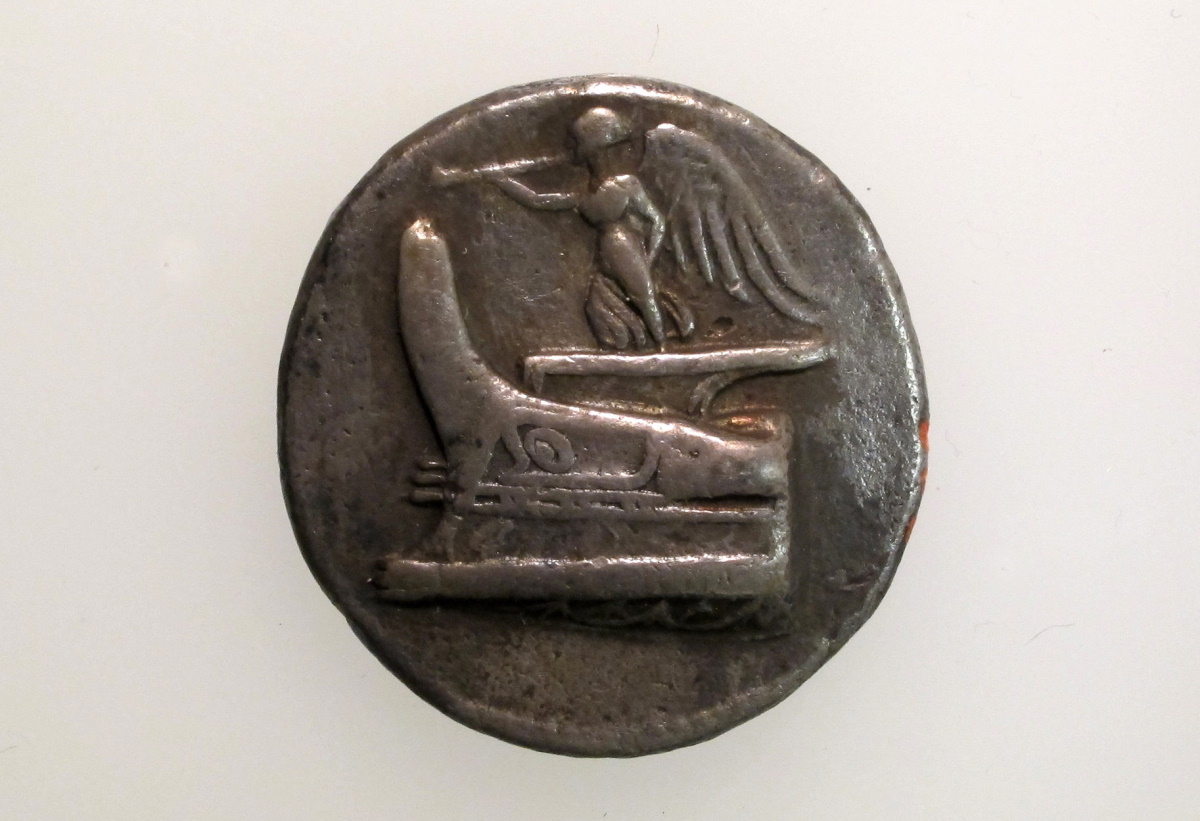 Silver tetradrachma with Victory blowing a trumpet from the bow of a ship, circa 300 BC. Source: Metropolitan Museum of Art.

The straight metal trumpet actually had a long history even before the Greco-Roman period. The Egyptians were using such instruments at least as early as the reign of Akhenaten in the 14th century BC. In the relief shown below, such a trumpet can be seen being blown at the far right. 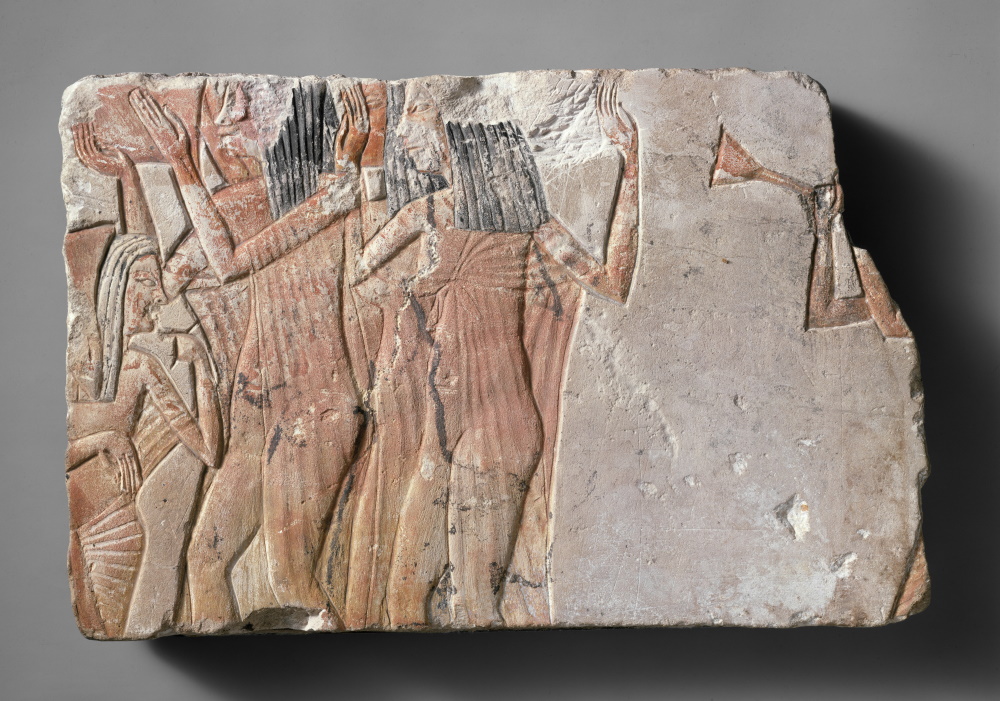 Relief of dancers and a trumpeter, from El-Amarna, reign of Akhenaten, circa 1350 BC. Source:  Metropolitan Museum of Art.

This relief shows a trumpeter standing at the ready, with his trumpet in his hand. 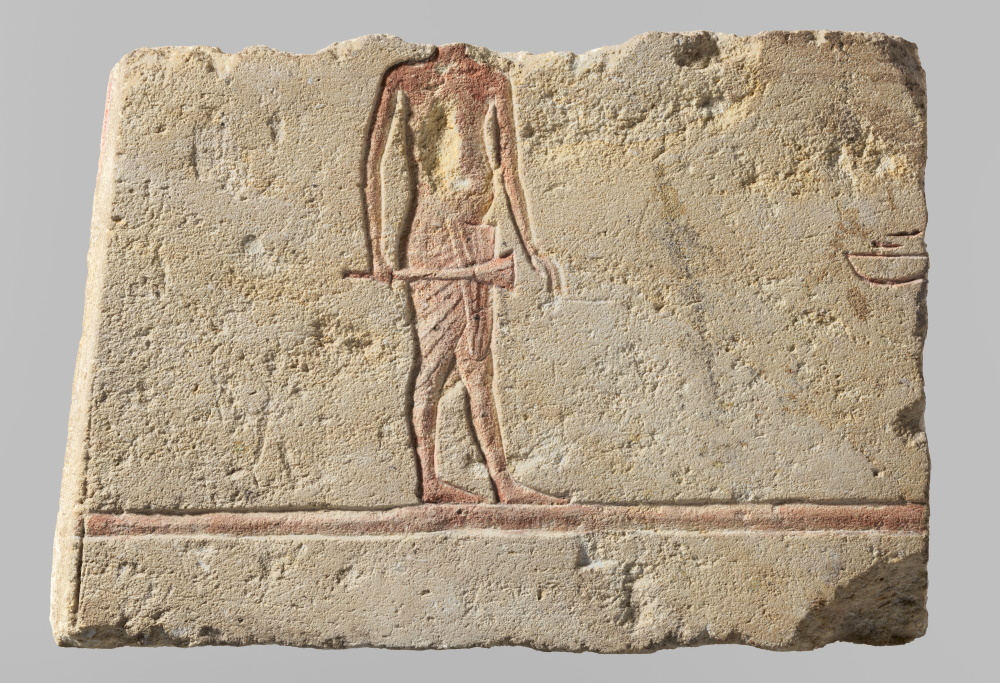 Egyptian trumpeter with a straight trumpet, standing at the ready. From Tel-Amarna, reign of Akhenaten, circa 1350 BC. Source: Metropolitan Museum of Art.