Was Jesus black? This question comes up from time to time. After all, how do we know what ancient people looked like? In this case, archaeology provides a clear answer. In a nutshell, no, Jesus was not black. This is clear from two perspectives. The first is that the Jewish people of the OT period were not black, a fact that is made abundantly clear by ancient depictions of people in that region. The second is that depictions of people from the area of Judea/Palestine in Jesus’s day make clear that the Jewish population was not black in the 1st century AD either.

Jews in the Old Testament

The ancient Egyptians have left abundant evidence of both their own skin color and the color of the people they interacted with. They depicted all of the people groups to their north as light-skinned. The broad term for these groups was Asiatics, although the Egyptians were also familiar with sub-groups such as the Amorites, Hittites, Philistines, and Syrians. By contrast, they depicted the ethnic groups to their south as dark-skinned. This was the area of modern-day Sudan. These people were known in antiquity as Cushites or Nubians. The following photos illustrate these different ethnic groups and skin tones as represented by the Egyptians in about 1150 BC, or about the time of the biblical judge Gideon. 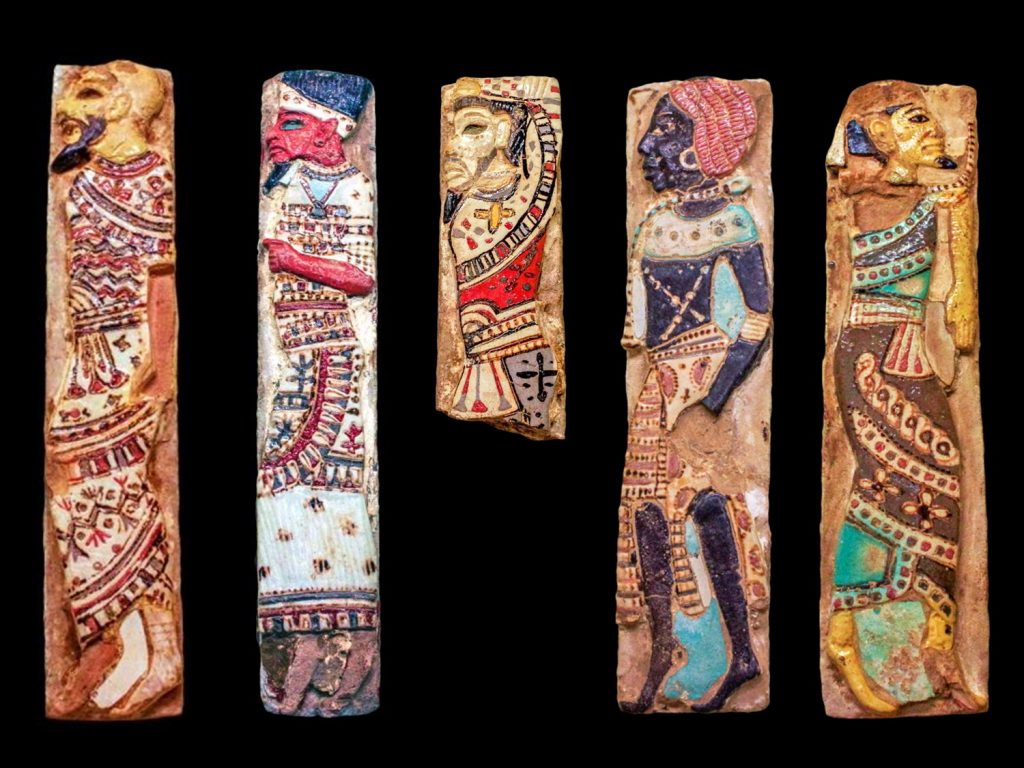 The next depiction is slightly earlier, from the reign of Ramesses II. 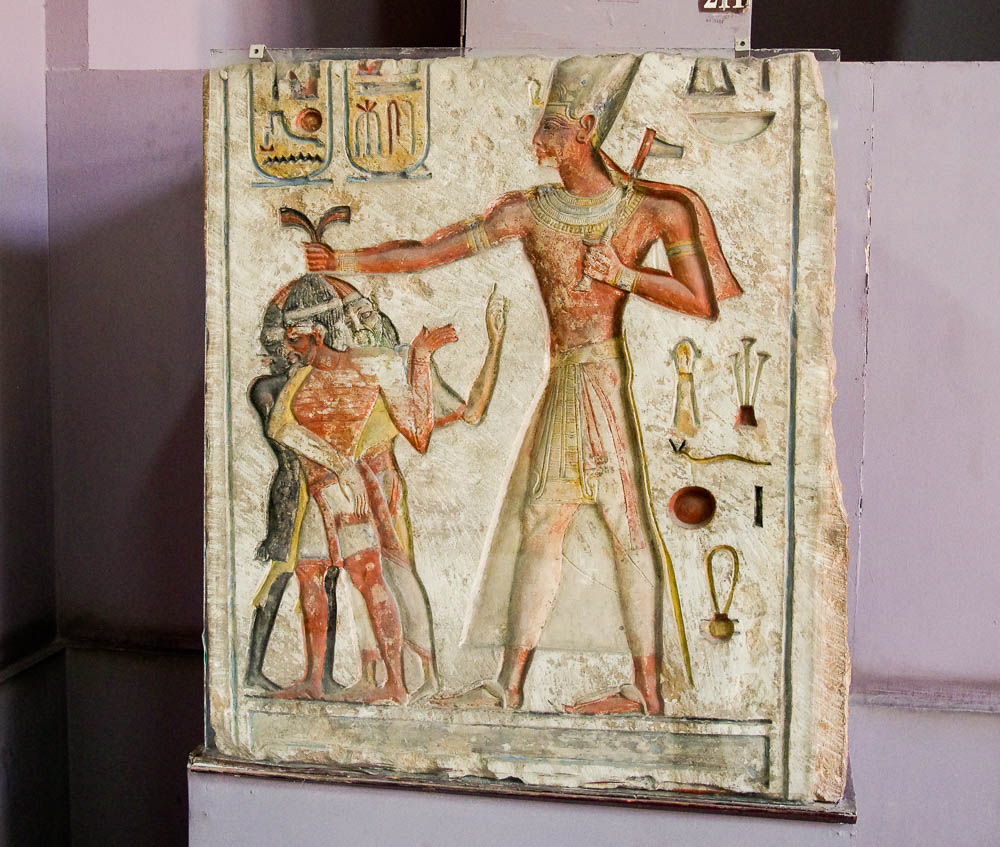 Ramesses II with captives representing various ethnic groups, circa 1250 BC.

Notice that the Egyptian king is colored red, the typical way in which Egyptians represented themselves (particularly men; women were often shown in a lighter color). The three captives are shown in three different skin tones. One is the same color as the Egyptian king, one is darker, and one is lighter. They represent Asiatics, Shasu (bedouin), and Nubians. Notice that skin color is only one way in which these representative groups are differentiated; they also differ in clothing, hair, and facial hair. Incidentally, the Nubian is depicted wearing a leopard skin, which hangs half way down his calf. 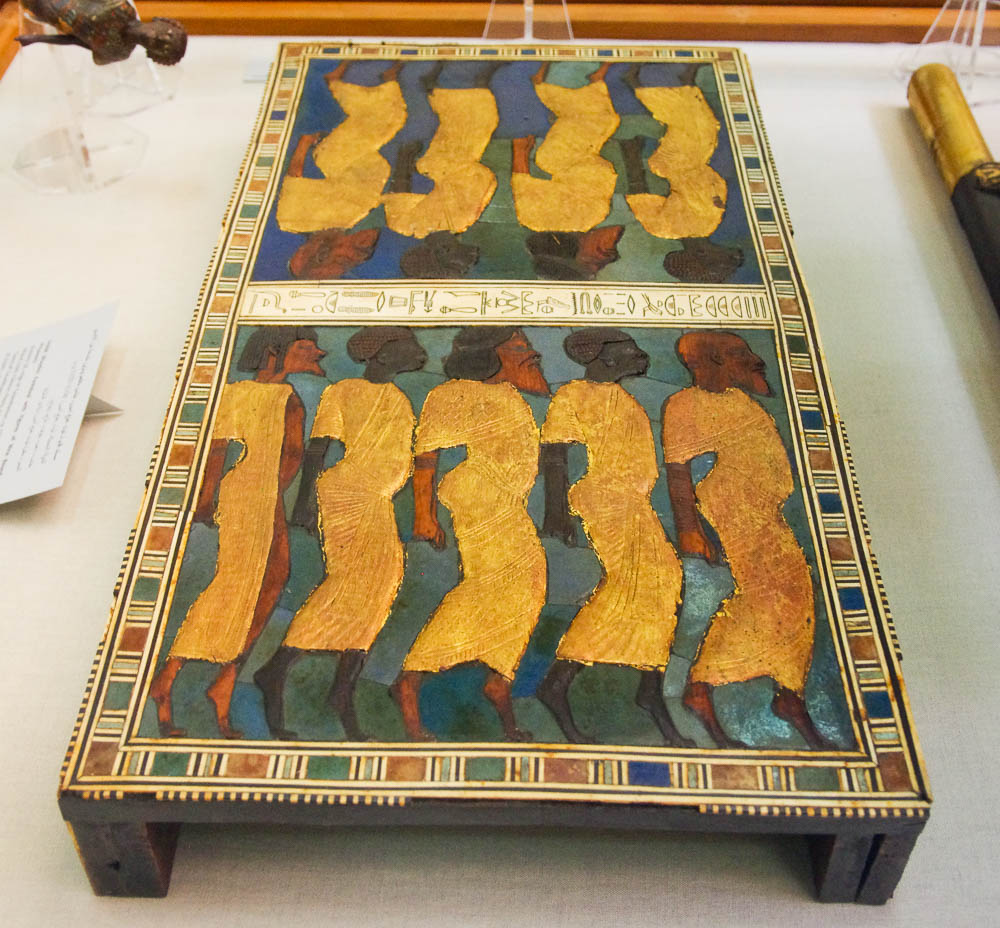 Foot-stool of King Tut, with the traditional 9 enemies of Egypt, circa 1350 BC.

It is no accident that enemies of the Egyptian king are portrayed on the soles of this set of sandals. The king would symbolically walk all over his enemies every time he wore them. Notice also the skin tones used to represent enemies from the northern and southern frontiers of the kingdom. 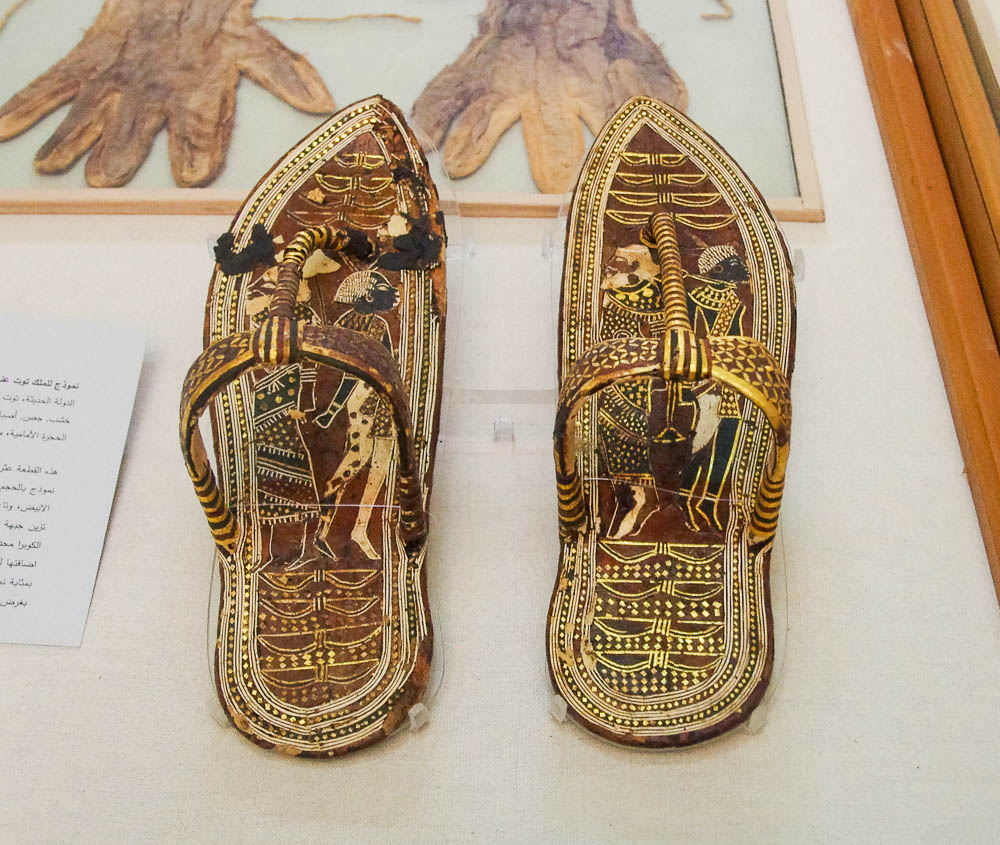 Royal sandals with Egyptian enemies, from the tomb of King Tut, circa 1350 BC.

Like the sandals shown above, this walking stick of King Tut displays two figures that represent Egyptian enemies to the north and the south. 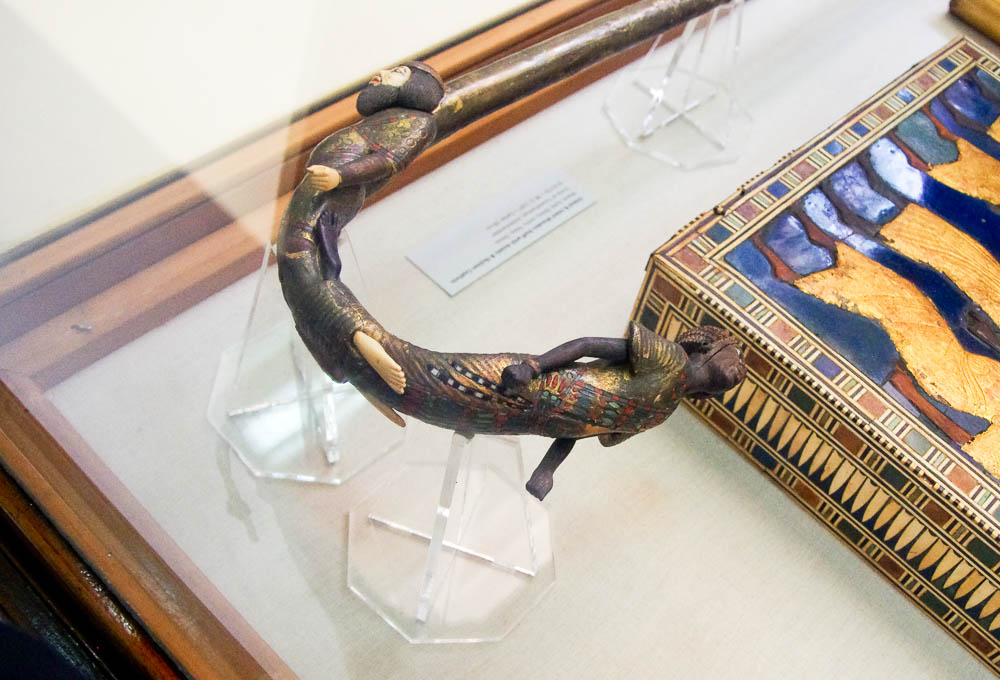 The Egyptians also employed foreigners as mercenaries, from a very early period. This model depicts dark-skinned Nubian archers that formed a unit of Egyptian mercenaries around 2000 BC. Archers were the most important and valuable kind of unit in ancient warfare because of their ability to inflict damage from a distance. 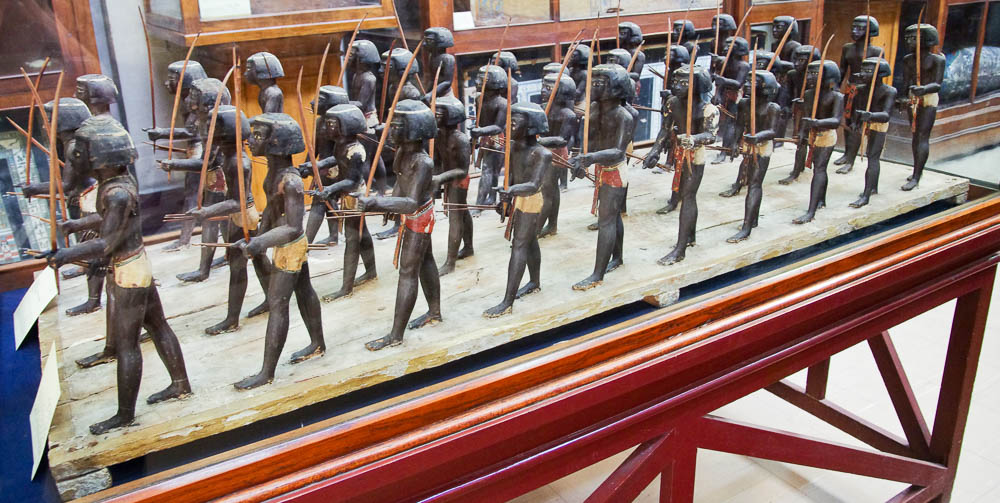 For the sake of comparison, this model from about the same time depicts native Egyptian soldiers.

Egyptian spearmen, from Asyut, Egypt, circa 2000 BC.

These depictions make it clear that darker-skinned peoples lived south of the Egyptian heartland, and lighter-skinned peoples lived to the north, which included the territory of ancient Israel. This is not to say that those living north of Egypt were only lighter-skinned people. There are a number of references to “Cushites” in the Old Testament: Moses was married to a Cushite woman (Num 12:1), and a Cushite was employed in David’s army (2 Sam 18:21). It is highly likely that these people were dark-skinned. However, these were exceptions, not the rule. Without exception, the Egyptians depicted the people groups north of themselves as lighter-skinned than themselves, and those to the south as darker.

Although they were much further away, the people of Mesopotamia sometimes interacted with people from south of Egypt as well. Assyrian reliefs rarely retain any of their original coloration, but it not difficult to see how they depicted their Nubian enemies, and they are quite similar to the Egyptian portrayals with regard to hair, facial characteristics, and lack of beards, unique things that set them apart from how other Assyrian enemies were depicted. 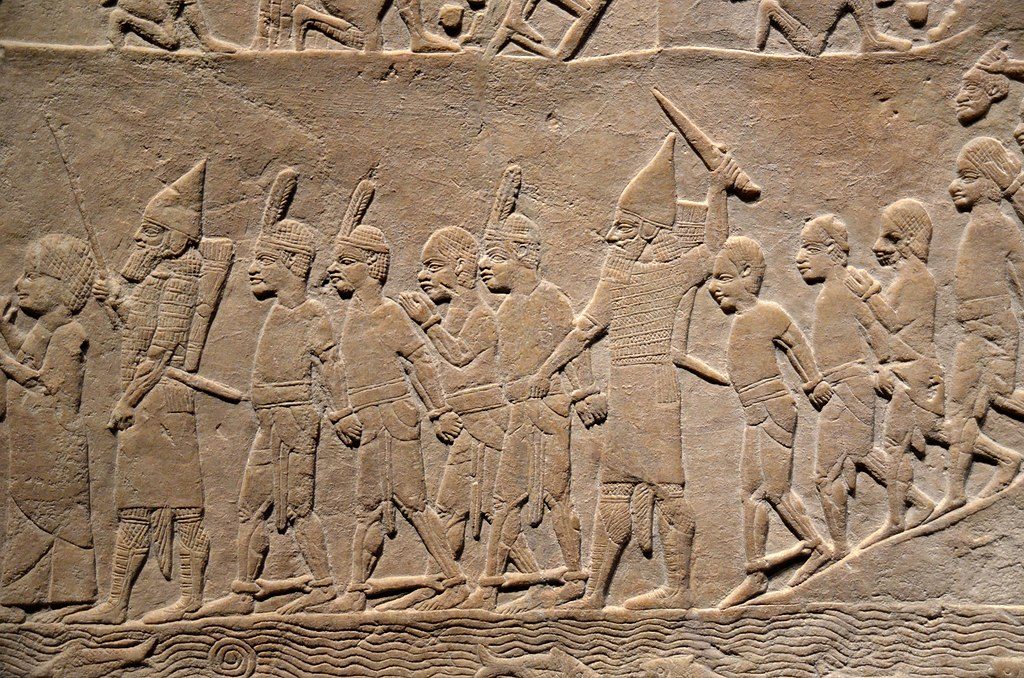 Assyrian soldiers with Nubian captives, from the palace of Ashurbanipal, circa 650 BC.

Jews in the Time of Jesus

Given the background of the Jewish people, it is no surprise that they are never depicted in Greco-Roman art or literature as dark-skinned. Once again our best color depictions come from 1st century Egypt. Local people are depicted as fair to medium in skin tone. Keep in mind that this was at a time when the indigenous peoples of modern-day Europe were considered barbarians. 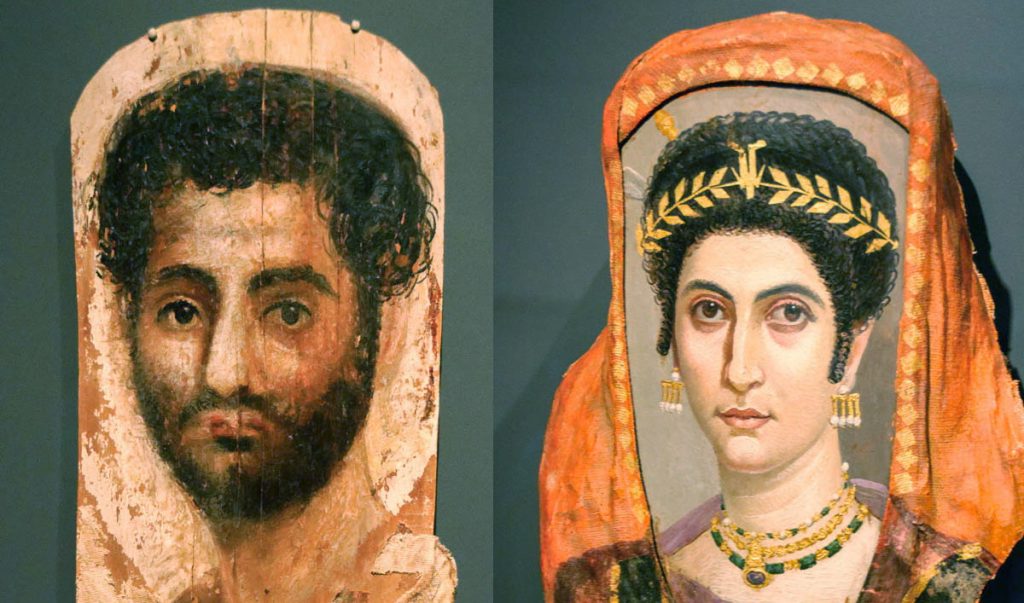 This is the regular Greco-Roman depiction of men and women in the Mediterranean world, illustrated in everything from frescoes to mosaics to statuary. This may be compared to one of the earliest known depictions of Paul. The fresco below is of the Apostle Paul. It comes from a cave known as the Grotto of Saint Paul, located in the foothills on the southern side of ancient Ephesus. His name is inscribed beside him, “Paul” (Gk. ΠΑΥΛΟΣ). 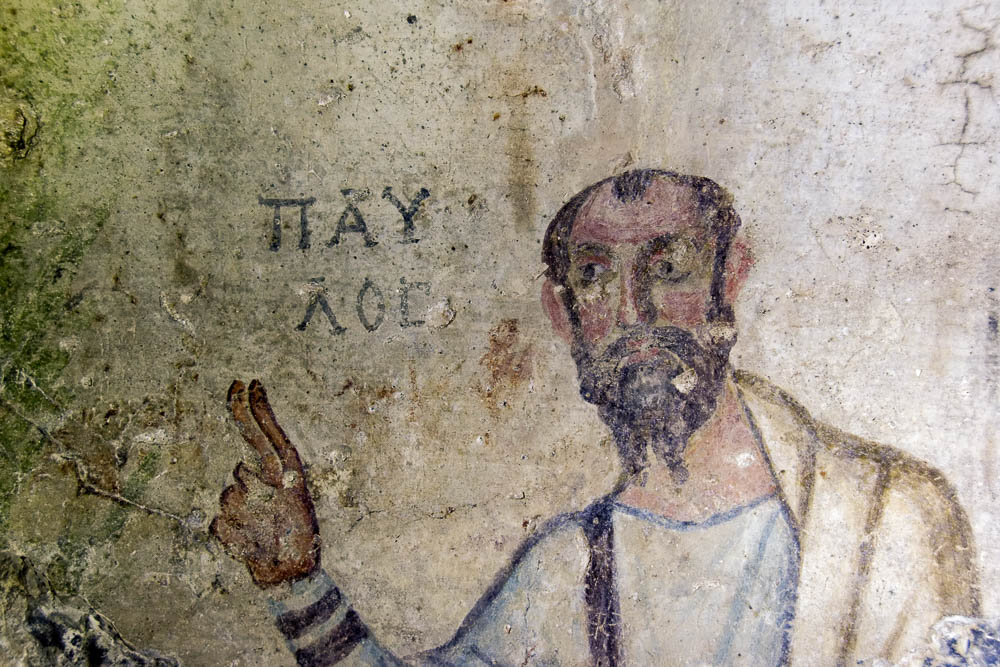 Portrait of St Paul, from the Grotto of Paul at Ephesus, circa AD 500.

This, then, would also represent the Jewish population that was spread throughout the diaspora. This is not to say that the Greeks and Romans never interacted with dark-skinned Africans. They clearly did, and left records that indicate they were well aware of the various physical attributes of blacks, including skin color. 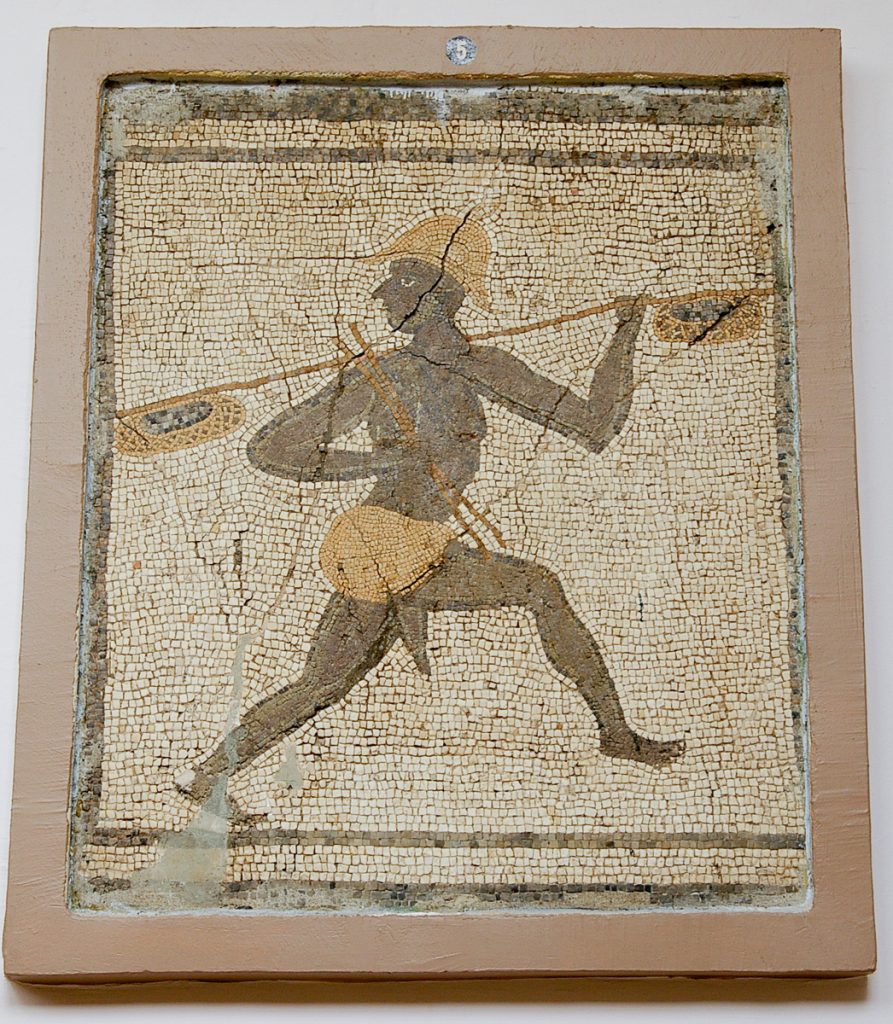 Depiction of a Negro fisherman, from Antakya, 2nd century AD. 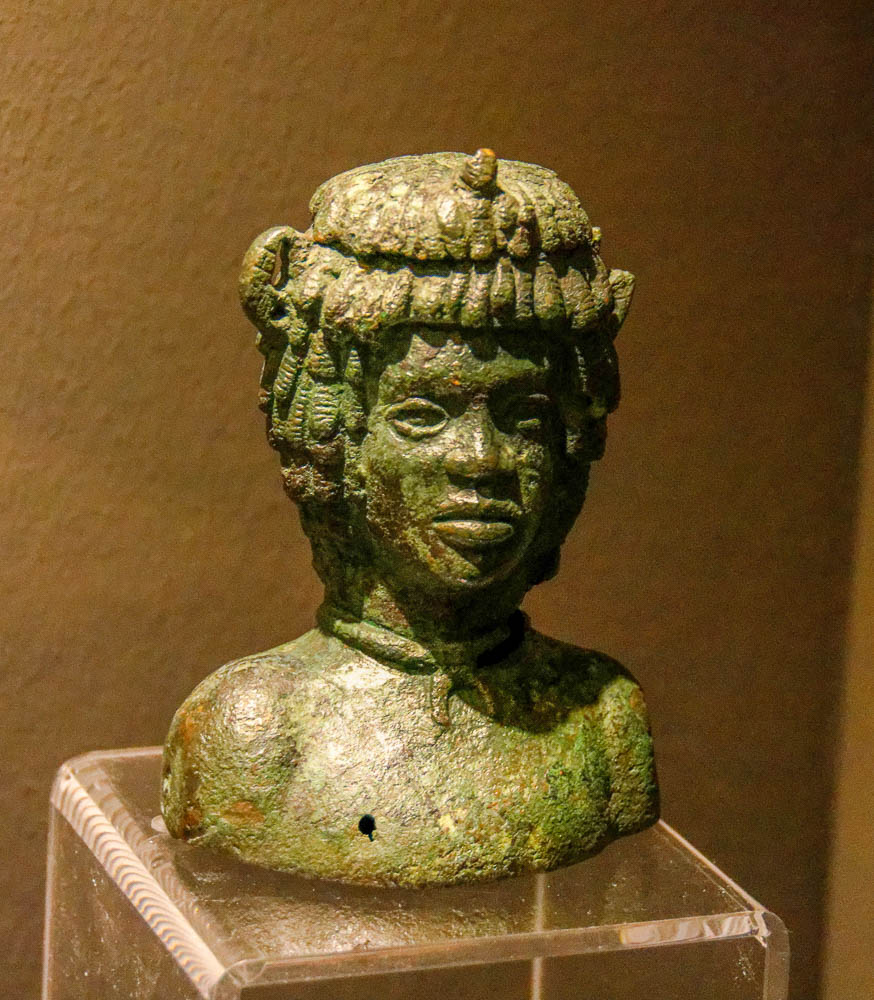 Perfume vase in the form of the head of a black youth, circa AD 200.

Perhaps the best-known person of African descent to appear in the New Testament is the Ethiopian official who worked for Candace, queen of the Ethiopians (Acts 8:27ff). Most biblical scholars and historians believe that this man, an early convert to Christianity, would have been dark-skinned (Ethiopia was the Roman province formerly known as Cush or Nubia; its capital was at Meroë in modern Sudan, which has some notable pyramids from this period). Notably this man had come to Jerusalem to worship, indicating that the Jewish religion had spread south of Egypt prior to the time of the New Testament.

It should go without saying that Jesus also was not a light-skinned, blue-eyed, blonde Scandinavian. He blended in with the population in his region, and was not remarkable in appearance.