The timeline below is marked with some of the rulers and events of the period covered by these verses; the placement of the verses themselves is marked by the stars, which contain the corresponding verse numbers. 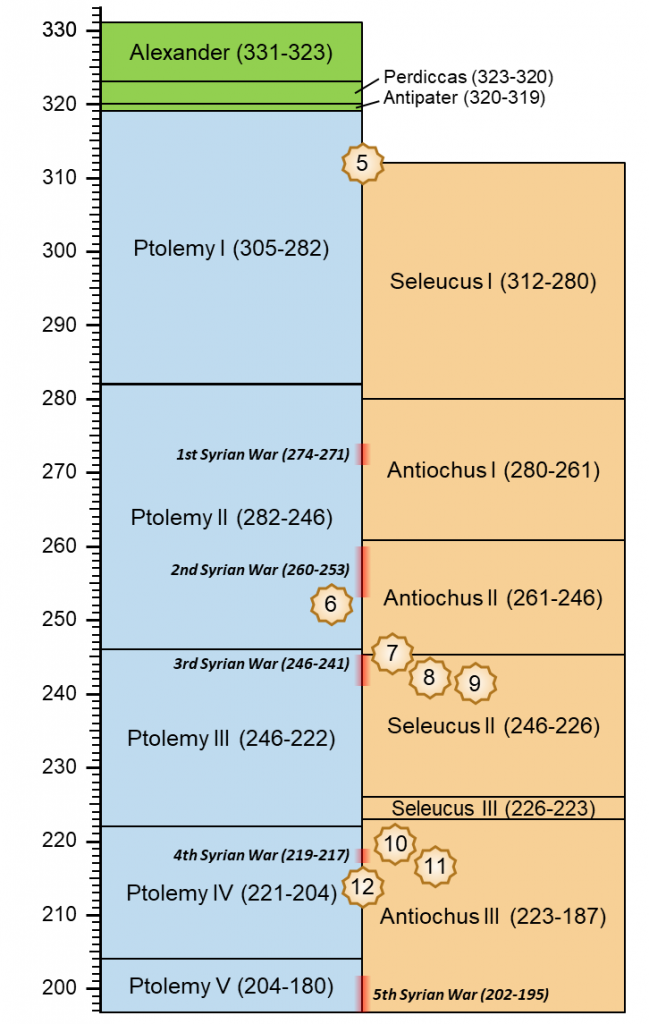 Below I will give the text of the verses and briefly identify the historical figures and a few of the events that they describe.

5 “Then the king of the South (Ptolemy I) will grow strong, along with one of his princes (Seleucus I) who will gain ascendancy over him (began rule in Babylon about 312) and obtain dominion; his domain will be a great dominion indeed.

6 “And after some years (around 252 BC, following the peace agreement of 253 BC between Antiochus II and Ptolemy II to end the Second Syrian War) they will form an alliance, and the daughter (Bernice) of the king of the South (Ptolemy II) will come to the king of the North (Antiochus II) to carry out a peaceful arrangement (Antiochus divorced his wife Laodice to marry Bernice, promising Bernice that her progeny would sit on his throne). But she will not retain her position of power, nor will he remain with his power, but she will be given up (killed by Laodice, along with her infant son Antiochus), along with those who brought her in, and the one who sired her (Ptolemy II, or her child), as well as he who supported her in those times (Antiochus II).

7 “But one of the descendants of her line (Ptolemy III, Bernice’s brother) will arise in his (Ptolemy II) place, and he will come against their army and enter the fortress of the king of the North (Antiochus II), and he will deal with them and display great strength (revenge attack in 246, killed Laodice, took much booty, went as far as Babylon).

8 “And also their gods with their metal images and their precious vessels of silver and gold he (Ptolemy III) will take into captivity to Egypt, and he on his part will refrain from attacking the king of the North (Seleucus II) for some years (244-242).

9 “Then the latter (Seleucus II) will enter the realm of the king of the South (Ptolemy III), but will return to his own land.

10 “And his sons (Seleucus III and Antiochus III) will mobilize and assemble a multitude of great forces (the Fourth Syrian war, starting in 219); and one of them (Antiochus III) will keep on coming and overflow and pass through, that he may again wage war up to his very fortress.

11 “And the king of the South (Ptolemy IV) will be enraged and go forth and fight with the king of the North (Antiochus III). Then the latter will raise a great multitude, but that multitude will be given into the hand of the former.

12 “When the multitude is carried away, his heart (Ptolemy IV) will be lifted up, and he will cause tens of thousands to fall; yet he will not prevail.”