Samuel and the Tabernacle

The tabernacle was a portable structure that had every sign of being a temporary structure. Constructed as a semi-permanent tent, it had walls made of wooden panels set in metal sockets. The whole was covered with several layers of material (linen, woven goat hair, and leather). The tabernacle was surrounded by posts, between which were hung linen curtains. The entire structure could be taken apart for transportation, and it was moved with the Israelites during their wanderings in the wilderness.

When the land was initially subdued, Joshua and the Israelites met at Shiloh and set up the “tent of meeting” there (Josh 18:1).  The tabernacle apparently remained at Shiloh for a very long time.  This is evidenced, for example, by the statement that the Danites set up an image at Laish and that it was there “all the time that the house of God was at Shiloh” (Judg 18:31).  Shiloh was also the location of the annual “feast of Yahweh” when the tribe of Benjamin was nearly exterminated (Judg 21:19).

It is noteworthy that at Shiloh, at least in the later period, the tabernacle seems to have had a more permanent structure.  In the narrative of Samuel’s youth, the place is referred to twice as the “temple of the Lord” (1 Sam 1:9, 3:3).  This phrase had not previously been used for the tabernacle, although it was the common name for the permanent temple built later by Solomon.  Also, Eli is described as sitting beside the “doorpost” of the temple (1 Sam 1:9).  This term is never used to describe the original components of the tabernacle (Ex 26), but it is used with reference to permanent structures like a house (Ex 12:7, 21:6) or even a city gate (Judg 16:3).  Also, Samuel “opened the doors of the house of the Lord” the morning after God spoke to him (1 Sam 3:15).  If there was a more permanent structure at Shiloh, it is impossible to tell when it was built. The Mishnah says that “When they came to Shiloh, high places were forbidden.  There was no [fixed] roof, but a structure of stones beneath and curtains above them” (Zevachim 14:6). 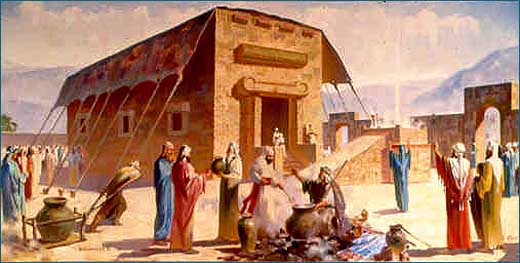 Semi-permanent tabernacle at Shiloh as envisioned by the Temple Institute.

Such a structure would account for some of the descriptions of the Old Testament. At the same time, it is somewhat puzzling that, if such a stone structure existed, that David would think it necessary to build him a house (1 Sam 7:1-2). And God’s response is interesting as well, “For I have not dwelt in a house since the day I brought up the sons of Israel from Egypt, even to this day; but I have been moving about in a tent, even in a tabernacle. Wherever I have gone with all the sons of Israel, did I speak a word with one of the tribes of Israel, which I commanded to shepherd My people Israel, saying, ‘Why have you not built Me a house of cedar? (2 Sa 7:6-7). Perhaps the ongoing excavations at Shiloh will shed some light on this question.

Incidentally, when Solomon had completed the construction of the temple in 959 BC, the tabernacle was brought to its final resting place there. “And they brought up the ark of the LORD and the tent of meeting and all the holy utensils, which were in the tent, and the priests and the Levites brought them up” (1 K 8:4).  The remains of the tabernacle would have been stored in one of the side rooms, and there is no further mention of it in the Bible.  Unless the tent had been miraculously preserved by God it would have had signs of significant wear, having survived almost 500 years of continuous service.