The final section of the book of Daniel is the vision recorded in chapters 11-12. The introduction to that section is chapter 10, which describes the prelude to the vision. Chapter 10, in turn, begins with a notice that Daniel had been in mourning for three weeks prior to the vision.

Dan 9 records Daniel’s prayer following his reading of the 70 years prophecy in Jeremiah. This occurred in “the first year of Darius,” which was likely in 538 BC. Sometime that same year Cyrus decreed that deported people, including the Jews, could return home (Ezra 1:1-4). The actual return may have begun in late 538 or early 537 BC. Daniel’s period of mourning took place in “the third year of Cyrus,” likely in March or April of 536 BC (cf. Dan 10:4).

If inclusive reckoning is used for the period 605 BC to 537 BC (double-counting the transition years between Jehoiakim and Jehoiachin and Jehoiachin and Zedekiah), the period is 70 years. For the desolation of the temple, however, the 70 year period did not begin until the temple was destroyed in 587 BC. 2 Chron 36:21 seems to state that the desolation of Jerusalem, and perhaps the temple specifically, would last 70 years. 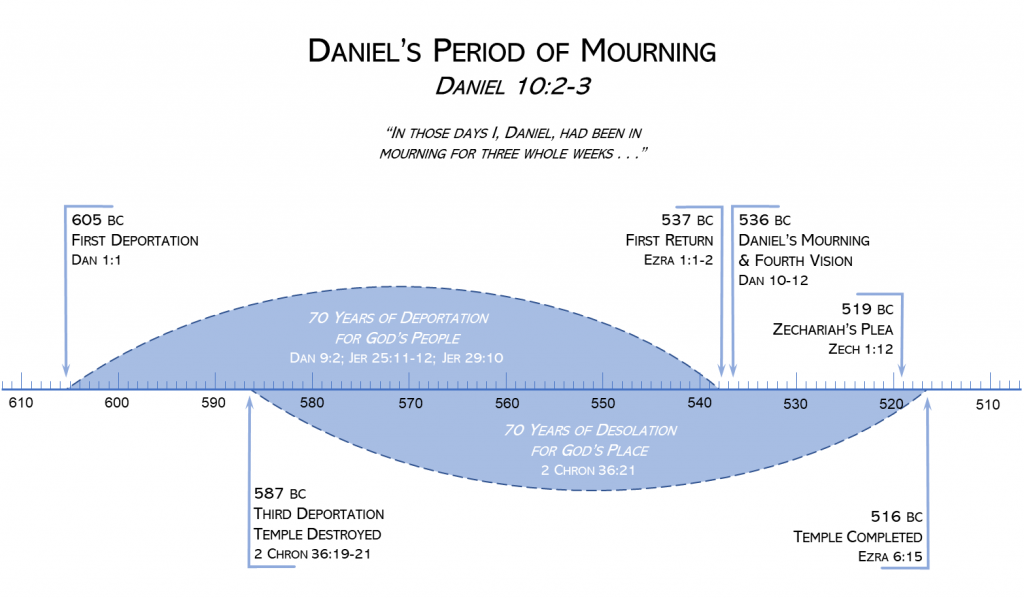 It may be that Daniel did not perceive that these two periods of 70 years were different form each other, and he was in mourning because the temple had not been rebuilt. The period between the first return and the completion of the temple was a time of difficulty and stress for the Jews.  In fact the city itself was not rebuilt for another 60 years; it remained in ruins until the days of Nehemiah.

Daniel 10:1-4 ends with a final chronological note that is of interest. Daniel’s vision, which followed the three weeks of mourning, took place “on the twenty-fourth day of the first month.” The first month of the Hebrew calendar is Nisan, which falls in March or April on the Gregorian calendar. It is difficult to say with certainty which day this was on the Gregorian calendar, largely because the start of the new month (which coincided with the new moon) was not based on calculation but on observation. This means it could have been delayed slightly from what we would calculate. The chart below gives a good estimate as to when this would have been, assuming the year was 536 BC.