Babylon – How to Take a Strong City

Ancient Babylon was a mighty city. Although ancient historians greatly exaggerated its size as well as the height and width of its walls, it was likely the largest city of its day. Excavations have shown that the city walls were built of mudbrick, using bitumen as mortar. The Ishtar Gate , which was located near the palace, was 45 feet tall and 32 feet wide, which probably reflects the approximate size of the rest of the city walls. The city proper was about 2 by 3 miles in size, although there may have been a perimeter wall that encompassed a much larger area.

Babylon straddled the Hillah branch of the Euphrates River, so it had plenty of water [it also had walls along both banks of the river to prevent attack from there]. The city had previously been taken by siege and starvation, so Nebuchadnezzar had laid aside many years worth of food in the city to prevent that from happening again. Given such a strong situation, how could the Persians ever hope to take the city?

There are a couple of options. The Hillah and Hindiyah branches of the Euphrates diverge about 15 miles NW of ancient Babylon. It could be that the Medes and Persians simply dammed up the Hillah branch at this point and forced the water to flow through the Hindiyah branch. 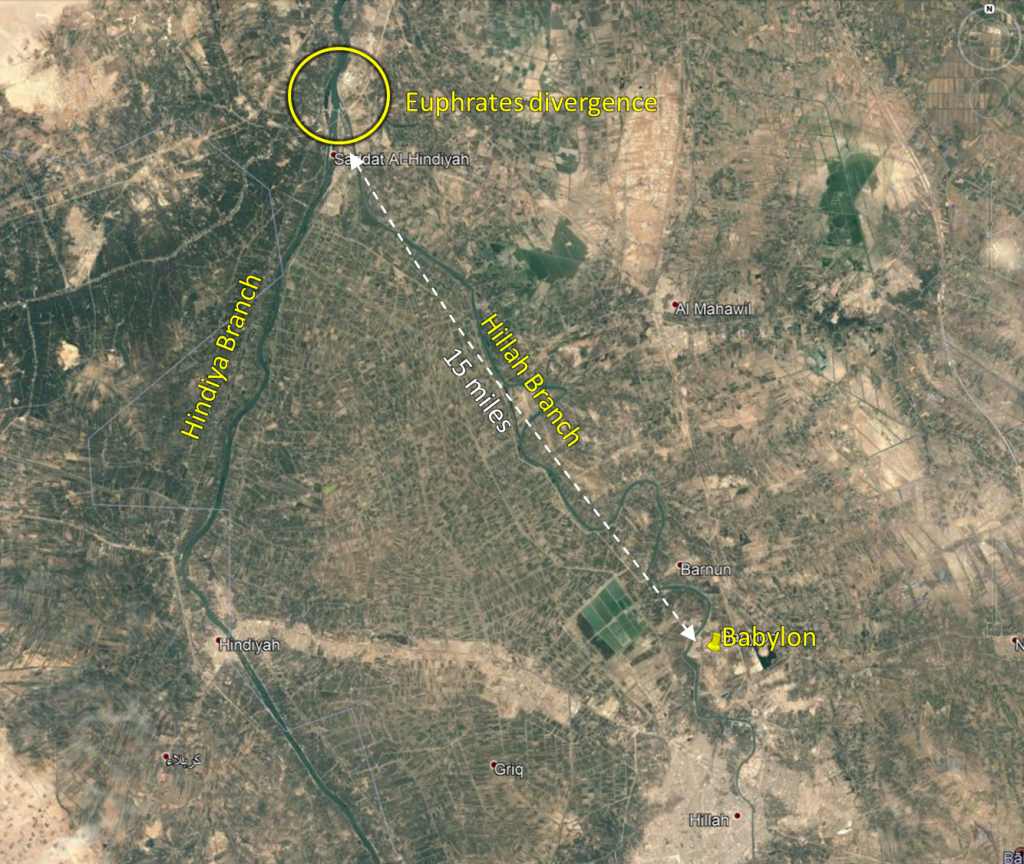 Divergence of the Hillah and Hindiyah branches of the Euphrates River.

Even in more recent years there has been significant work done at this divergence to regulate the flow of the river down one branch or the other. A barrage (a low-head dam) was built here in the late 1800s to prevent the Hillah branch from silting completely shut.

A second and closer option may have been the depression located just a mile NW of the city. Even today this area functions as a shallow lake that covers nearly 2 square miles. It was likely just a marshy area in antiquity, but a depression such as this could have been used as a reservoir to hold the waters of the river. The nearest bend of the Hillah Branch of the Euphrates is about 1/2 mile distant today, so a trench to connect the two would not have posed a great problem. The river may have been even closer in antiquity. 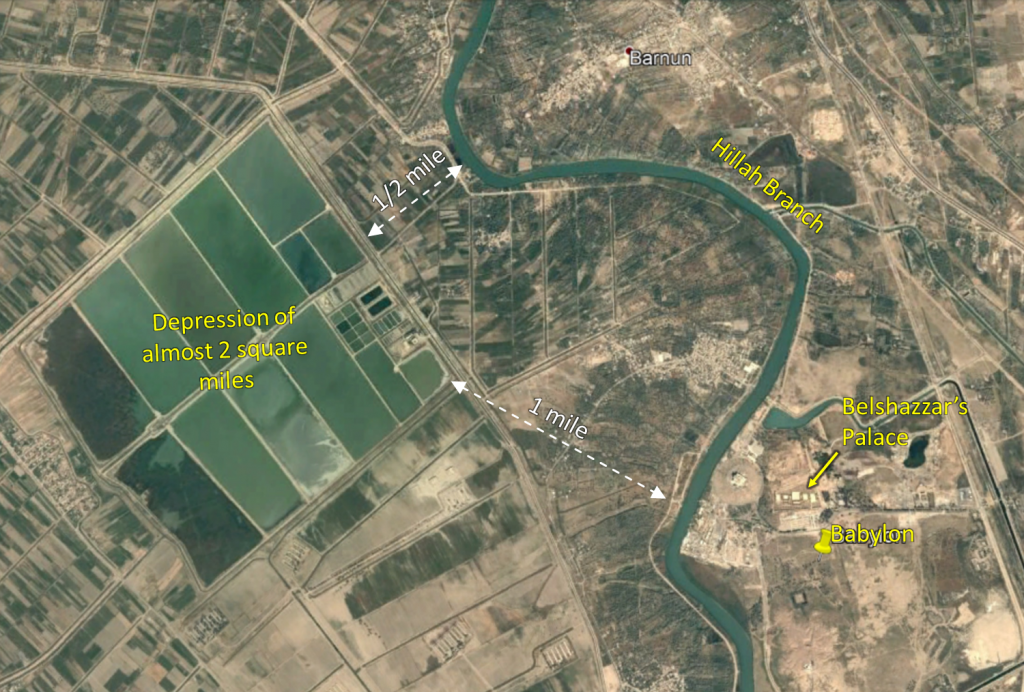 The depression located 1 mile NW of Babylon. This feature is also quite visible on the previous satellite image.

The book of Daniel does not indicate how the city was taken, only that it fell. The way in which it fell, which is described by ancient historians like Herodotus and Xenophon, makes a lot of sense geographically. It also illustrates a wise saying found in Ecclesiastes 9:13-16, “Also this I came to see as wisdom under the sun, and it impressed me. There was a small city with few men in it and a great king came to it, surrounded it, and constructed large siege-works against it. But there was found in it a poor wise man and he delivered the city by his wisdom. Yet no one remembered that poor man. So I said, ‘Wisdom is better than strength.’ But the wisdom of the poor man is despised and his words are not heeded.” Belshazzar would have done well to listen to the words of his Judean captive, Daniel.